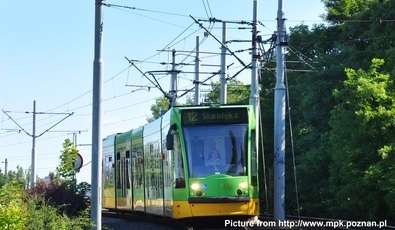 In 2010 the Public Transport Company of Pozna?, MPK, conducted a grinding operation of tram rails in selected sections to reduce noise from the trams and increase the comfort of tram journeys in Pozna?.

A study of quality of life in Pozna?, conducted by researchers in 2009 and commissioned by the City Council found that more than 60 percent of inhabitants complain about noise levels. The permissible level of noise in the downtown and adjacent neighbourhoods during the day is 65 dB (at night 55 dB). This level is, however, often exceeded, especially by older tram vehicles operating on tramways that have not been repaired for a long time. Researchers at the Acoustic Research Centre at the University of Adam Mickiewicz in Pozna? studied the noise caused by trams. They revealed that in the city centre, the noise of the trams varies from 70 to 75 dB, and in some streets it is even greater.

In 2010 MPK decided to reduce the noise level by grinding rails. This process involves grinding the rail head waviness, that is, levelling deformations that arise during track operation and reducing noise at the wheel-rail point of contact.

To carry out the grinding operation of tram rails, a special machine was imported from Germany to work on the loudest track sections. At the time, a similar device was not available in Poland. The grinding machine worked at a rate of 1 kilometre per 4 hours. The sections for grinding were chosen by MPK on the basis of noise measurements.

The works had to be carried out at night to avoid disruption to daytime tram traffic. The lead time on the project was dependent on the weather, because no grinding can be done during rain.

In the fight against noise, MPK used a variety of tools, such as soundproofing tracks, rail veneers, rubber discs on rails crossing city roadways and elastic pads to eliminate vibration effects. Speed limits for trams were also introduced, resulting in a reduction in the noise level of 10 dB. This, however, was associated with increased travel times and higher energy consumption.

The grinding of the rails has not only contributed to a reduction in the noise caused by urban trams, it has also improved the comfort of a tram ride as the trams no longer shake at the points of unevenness.

Admittedly, the grinding of the corrugated rail wear is only one of a number of ad hoc methods for improving the track. Cities with greater financial resources can invest in regular cleaning by grinding the rail head surface, which can be done during daily traffic. However, this type of preventative maintenance, used mainly for new railways, is much more expensive and ineffective on old tracks. Because of the cost, a similar technology was applied on the route of the Fast Tram of Pozna? (PST – for details see: /index.php?id=13&lang1=en&study_id=3135), with clearly noticeable results.

Poznan's idea of silencing by grinding was successfully applied in other Polish cities, for example, Torun and Krakow.