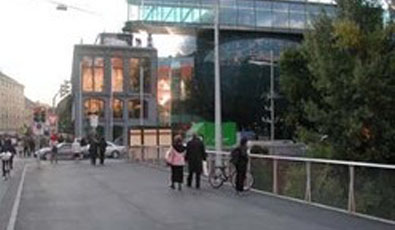 The strolling zones in Graz present a new traffic solution: priority for pedestrians but not totally excluding car use. Four such zones were implemented in Graz. Citizens participation concepts were tested for the first time in Graz.Achievements were a boost in commercial activity and substantial reduction of car traffic and on street parking.

Various restrictions for cars have already been implemented during the last years. The city centre has many pedestrian precincts and the city administration put a lot of effort in the promotion of cycling. But there is still a lack of a special zone neither excluding car traffic totally nor a pedestrian precinct.
The new strolling zones present a good traffic solution for pedestrians - wider and more attractive pavements - whilst not totally excluding car use.

A central spot around the monument is a “strolling zone” for pedestrians and includes a café with an outdoor garden, heavily frequented during summer months. The square was equipped with additional cycle racks.

The square could be redesigned due to the fact that a new parking garage was built partly beneath it. The parking garage enables a major reduction of surface parking spaces on Karmeliterplatz and adjacent Freiheitsplatz.

For the first time in Graz the method of the “Bürgerbeteiligungsverfahren” was applied.>This is an intensive form of citizens participation, the result being a so-called “Bürgergutachten” - a citizens advisory opinion. It is the plan to put almost all of the recommendations from this opinion into practise, due to budgetary limitations only the first steps have been realised