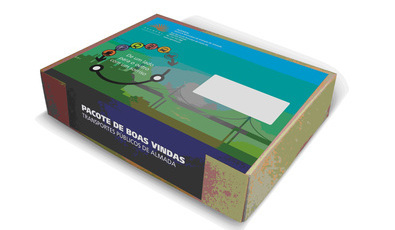 During 2012 AGENEAL and Almada City Council designed a campaign for the promotion of sustainable mobility amongst new residents of Almada. The core of the campaign was the offer of a Welcome Kit packed with information on the public transport network in the city.

As part of the European SEGMENT Project, and co-financed by the IEE Programme and AGENEAL, Almada City Council designed a new tool in the form of a promotion campaign for new residents. The New Residents Welcome Kit was inspired by the approach that Munich City Council adopted to deal with the issue of convincing new residents to use public transport and active travel modes instead of the private car.

In the Almada case, and following the SEGMENT mobility marketing segmentation methodology, the objective of the New Residents Welcome Kit campaign was to induce new residents to use public transport by offering them tailored and comprehensive information on Almada’s public transport. This approach identified that lack of information was the biggest barrier to public transport use by the target group.

The target group “New Residents” was surveyed and segmented according to the sustainable mobility marketing segmentation process. The analysis of the results concluded in the decision to promote public transport.  As the SEGMENT methodology explains that people tend to be more receptive to mobility behaviour change when they experience a big change in their lives (new house, new job, new school etc.), the campaign had to be done in the weeks following the arrival of residents to their new houses.

The New Residents Welcome Kit was developed with the help of marketing and graphics experts, who helped the AGENEAL and Almada City Council team to design the campaign according to the characteristics of the chosen target group.

As a demonstration campaign co-financed by IEE, the New Residents Welcome Kit campaign reached 600 new residents, over a period of 2 months.  The campaign implementation finished in late December 2012.  The municipality obtained the addresses of the latest 600 people to start living in Almada and sent them all a stylized cardboard box by courier. Inside there was a welcome letter that outlined the campaign and explained its context, as well as a PT Guide, information and promotion leaflets, some small gifts and free tickets for all Almada public transport.

Quantified results of the campaign are still to be obtained. A questionnaire comparing mobility behaviour amongst new residents who were subjected to the campaign and new residents that were not has also been conducted but, again, results are not yet available.

Nevertheless, the media response to this campaign (including TV coverage) was particularly interesting probably because the concept had never been tried in Portugal before.

Although the campaign development and implementation ran smoothly, some problems and constraints were identified. Firstly, it was discovered that the set up of such a large campaign takes a large amount of time, particularly when it includes publication of schedules and fares of bus networks (120 lines in Almada). This meant that by the time the campaign was ready to be launched, it could be that some information is already out of date, so updates need to be done at the last minute, just before printing the materials. Another problem was that the size of the package was too big for most courier boxes, meaning that a large amount of people had to get the package from the post office. As a result, 20% of the packages sent out were returned.

The evaluation showed the excellent effect of the campaign, as the use of PT increased by a very significant 13%, while car use decreased 6%. A not so positive result showed a decrease of 8% on walking. CO2 savings account to ________ (confirm calculations in MaxEva).

Detailed results are available via this link on the MaxEva project database.