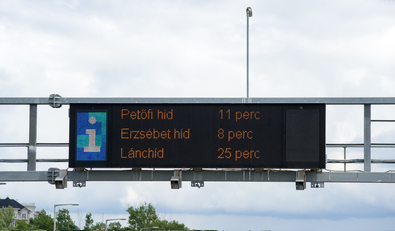 A new smart technology-based system was installed at the busiest entry-points of Budapest, with the aim to divert traffic away from congested areas. The system tackles the bottlenecks in Budapest's road network, which occur on the bridges over the river Danube.

Until recent years, there was no unified mobility management in Budapest. Separate entities were in charge of the public transport system, the road network and the cycle paths. With the creation of the Budapest Transport Centre, new, integrated solutions were sought for public transport, cycling, walking and individual motorised traffic. For the latter, congestion management was so far very limited, causing interruptions not only to private motor vehicle drivers/passengers, but also to public transport users. The latest improvement – implemented as part of the euro-regional EasyWay project – aims to improve this aspect.

As part of the project, cameras were installed at the M1/M7 motorway entry point, which is the busiest road section in the city, bringing traffic from the direction of Vienna/Western Hungary. A second batch of cameras was also installed at the bridges over the river Danube – in recognition that these river crossings represent the main bottleneck in Budapest’s road transport system. These cameras are connected to an intelligent system, which can recognise licence plate numbers and calculate the actual journey times between the two points.

A complex automated algorithm analyses and consolidates the measured values and, based on these, it informs car drivers through electronic boards about the suggested bridges to cross the Danube. The whole system works in real-time. If it detects extreme values it sends warning messages to the Traffic Management Department of the Budapest Mobility Centre. The system is designed to be able to provide a number of further traffic data: lane occupancy, overall road capacity and customised warnings.

The system is operated by the Budapest Transport Centre in cooperation with the National Motorway Agency. All relevant traffic data is exchanged between the IT systems of these two operators. After reviewing a number of options to divert traffic flows, they eventually opted for the simplest and most effective solution: the boards simply display estimated travel times, and leave the eventual route selection to the drivers.

The test phase of the system was concluded in June 2013, with positive results. The system works in a reliable way, and initial feedback from road users is also positive. The institutional cooperation works well between the two operating entities. However – and most importantly – more research is still needed to confirm if the system measurably reduces congestion, and to what extent.