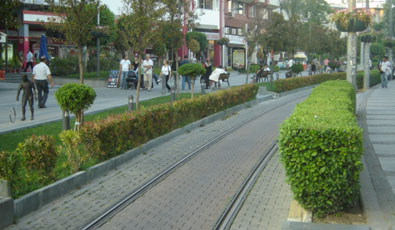 Antalya has become one of the few cities in Turkey that is actively supporting pedestrian-friendly schemes. The pedestrianision of Cumhuriyet Square in the city centre in 2008 helped integrate the historical pedestrian district of Kaleiçi with the existing pedestrianised streets, creating a continuous car-free area and a much improved civic image for the historical town centre.

Antalya is a well known destination for both local and international tourists, who come to the region for the many sandy beaches, natural beauty and historic sites of the region. The urban fabric itself is also of extreme value; however, rapid urban development and traffic growth (Antalya has the unfortunate claim to one of the country’s highest car ownership levels) somewhat tarnish the attractiveness of the historical core. The Greater Antalya Municipality launched a project in the mid-2000s to better conserve and improve the historical city centre of Antalya. The project comprised strategies both to conserve and rehabilitate the historical core, and to reduce motorised traffic in the centre.

Only a limited part of the pedestrianisation project has been implemented to date, however, already some significant steps have been taken. The pedestrianisation scheme focused on Cumhuriyet Square, which was previously traversed by traffic, separating the historical pedestrian district of Kaleiçi from the commercial core.>The commercial centre already contained some pedestrianised streets, however this new pedestrianisation scheme helped to integrate these two frequently visited areas of the city centre through the creation of a continuous series of pedestrian pockets, eliminating motorised traffic there.The pedestrianised square and its extensions have thus been transformed into a promenade that is frequented by both tourists and local residents as a place to meet and socialise, encouraged by the addition of defined seating areas, as well as other street furniture and lighting.

The complete project foresees a broader pedestrianisation of the centre; and while promising, this initial scheme has only been a small-scale activity.The new local government, elected in early 2009, has made it clear that they are dedicated to transforming the automobile-oriented transport system of Antalya into one that is more pedestrian-friendly, and have often repeated their commitment to further increasing the number of pedestrian areas in the city. This is an indication that the initial scheme is planned to be extended over a larger part of the city centre in the future.