A new model for urban food transportation in Athens: the U-TURN project 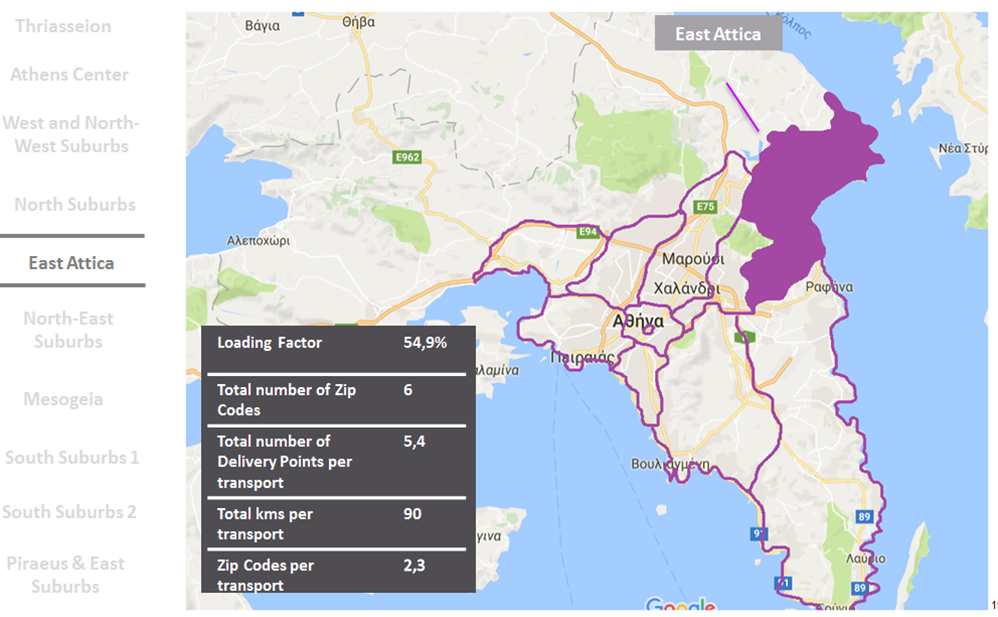 Population growth, congestion and environmental damage alongside increased use of home delivery services are challenging the traditional methods of freight urban logistics. According to CIVITAS Policy Note on Urban Freight Logistics (CIVITAS, 2015), freight urban logistics accounts for between 10 % and 15 % of the total distance travelled by urban road transport and emits approximately 6 % of all transport-related greenhouse gas (GHG) emissions. Therefore, a balance needs to be found between the economic advantage of an efficient and effective urban freight system and the impacts generated.

The following major consumer trends that increase the transport burden in urban contexts have been identified:

A number of solutions have been directed at urban areas to provide support for public authorities and transport stakeholders. Such solutions include Urban Consolidation Centres (UCCs), off-peak/night deliveries, cargo bikes and tolls in city centres. Collaboration in logistics involves working together to reduce the impacts of home delivery services and improve efficiency.

The Rethinking Urban Transportation through advanced tools and supply chain collaboration (U-TURN) project, funded by the European Commission as part of the HORIZON 2020 programme, aimed to identify new models for urban food transportation, based on collaborative logistics solutions, to:

The project was developed by a consortium with European-wide coverage, involving businesses in the food industry, academic experts on urban logistics and consulting companies with a range of different expertise. The general scope was to test and prove the potential benefits of collaborative logistics practices at different levels within the logistics chain. During the project, a ‘smart’ transport matching tool and a collaborative web platform were developed and tested by a third-party logistics providers online retailers and local food producers (farmers) to measure the impact of collaborative logistics practices.

Figure 1: Example of the food delivery distribution analysis in East Attica region in Athens conducted during the pilot 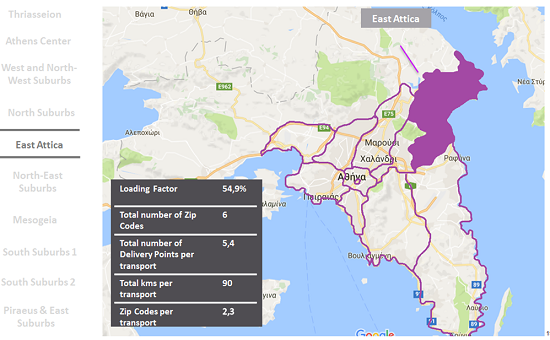 The pilot project in Greece focused on the goods distribution from an industrial area (e.g. retailers’ distribution centres, suppliers' warehouses and third-party logistics providers’ central warehouses) to stores in the urban area of Athens. More specifically, the aim of this pilot project was to identify collaborative logistics model scenarios among suppliers, retailers and third-party logistics providers, and then to investigate their implementation in actual settings. The implementation of shared logistics models in an urban environment was expected to effectively minimise operational costs and enhance productivity and efficiency in logistics; the objective of the pilot action was to measure the expected benefits. Within this context, four alternative business models were considered (www.u-turn-project.eu):

In each of the scenarios, the current operating modes of the companies involved and their respective distribution activities constitute the ‘as-is’ situation. The ‘to-be’ situation concerns the shared logistics models among different third-party logistics providers, suppliers or retailers. The pilot focused mainly on horizontal collaboration schemes where these are developed within the same level of the supply chain. 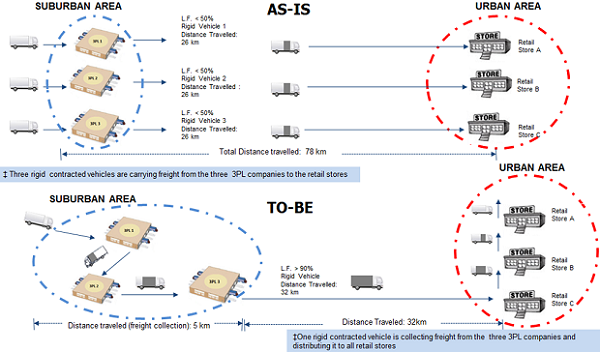 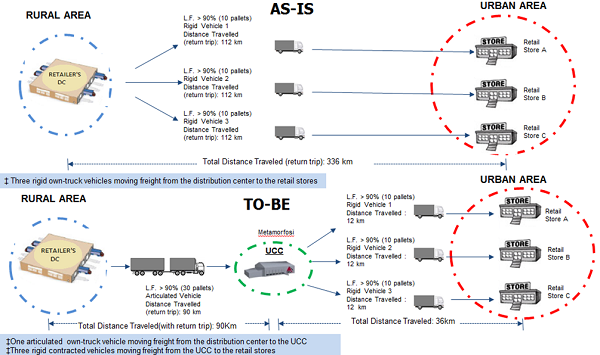 More specifically, a reduction of travel distance from 9 % to 48 % through a collaborative distribution among third-party logistics providers could be achieved, with even further improvements from introducing an urban consolidation centre serving the city of Athens. The reason for such a wide range is due to the variety of scenarios investigated. The reduction range is smaller in the scenario that considered the collaborative distribution of two third-party logistics providers, with different results according to the scope of interventions. In Athens city centre, it achieved around a 9 % reduction in distance travelled whereas in the surrounding region (Eastern Attica) it achieved 19 %. On the other hand, the introduction of a UCC would have a larger effect on distance reduction (up to 48 %). However, in this case, additional costs would have to be taken into account.

Last, but not least, the collaborative distribution between four third-party logistics providers, with the support of the U-TURN platform, indicated that 21.5 % and 48.5 % of the total loads and vehicles uploaded in the platform over pilot project execution period were matched. This evidence supported the initial findings, indicating that the number of matches and synergies can be increased when companies are strongly involved in collaborative activities. 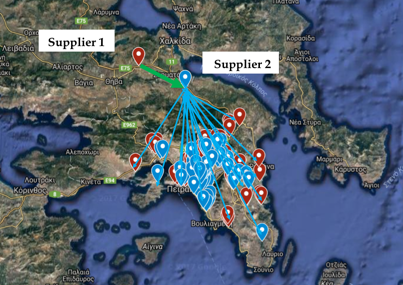 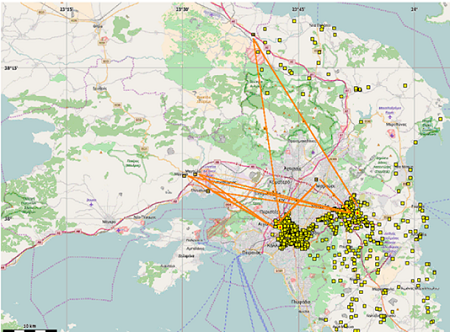 The insights obtained from the implementation of the pilot in Athens provide a good understanding of the benefits and barriers associated with horizontal collaboration in distribution. Furthermore, the involvement of third-party logistics providers, suppliers and retailers allowed for the analysis of the extent to which specific collaborative practices, vehicle sharing and urban consolidation centres can effectively minimise operational costs and enhance efficiency in logistics. In particular, results from the scenarios indicated that the implementation of shared logistics practices could result in significant benefits, including a reduction in the distances travelled, better utilisation of vehicle capacity (loading factor), reduced environmental impacts and reduced distribution costs.

Moreover, the Greek pilot also revealed some conditions that do not facilitate the implementation of shared logistics practices. An immature collaboration culture, a lack of trust between collaborators, low risk-benefit evaluation and a lack of common goals for cooperation appeared to be the most significant barriers to the implementation of shared logistics practices

These findings are in line with other studies that highlight the main barriers and challenges of the application of shared logistics practices (Cetindamar et al., 2005; Zhang and Cao, 2018). Moreover, during the execution of the scenarios, it was observed that the complexity of the distribution and administrative processes increases the difficulties in the implementation of an effective shared distribution scheme.

Transport collaboration can be a convenient solution not only for the private actors involved in logistics (who benefit from transport operating cost savings), but also for the local community (who benefit from a reduction in negative transport externalities). Hence, transport operators and governments should have an interest in supporting the implementation of more efficient and collaborative logistics schemes, especially at the urban level where negative externalities of transport have greater impacts.

Finally, it should be noted that collaborative distribution is not a quick win process.  Despite the great interest that most companies express, there is still a long way to go before there is a widespread implementation of collaborative logistics due to various reasons, such as the barriers mentioned above.

Strong involvement of the stakeholders, including high-level management, is required to identify the potential synergies and drive their successful implementation. Some sort of incentive for the implementation of collaborative schemes provided by the public sector to the private sector could also accelerate adoption.

However, the new trends such as e-commerce and multi-channel growth, new environmental regulations and increasing distribution costs are reshaping the logistics landscape and will turn collaborative logistics from an alternative to a necessity, as also stated in a recent Consumer Goods Forum study (2017).