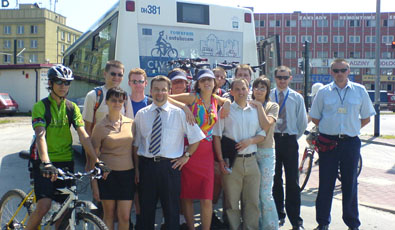 Just to make it easier and more comfortable to ride a bike in Krakow and to encourage inhabitants to use bikes more frequently as a mode of transport to recreational areas of Krakow particularly during the spring/summer season - this is the main purpose. New leisure related mobility services will enable to create a new cyclist friendly image of PT.

- To implement new leisure related mobility service in Krakow in order to increase a use of bikes and PT transport for the purpose of reaching recreational areas. Demonstration phase began with production of 15 bike grips. MPK constructed and tested a prototype of bike grip and than produced all bike carrying facilities using its own labour resources. Simultaneously bus routes and lines were chosen and special bus schedules were prepared. Afterwards 100 bus drivers were trained how to use new equipment for bike transportation>

The new service was launched in July 2006 and was preceded by the communication and marketing campaign. The news about the introduction of leisure related mobility services in Krakow were disseminated on local and national scale and met with a great interest of PT operators from other Polish cities. The following media were used for dissemination: local and national press, local radio and TV channels, internet and additionally direct meetings with potential users during the grand launch of the service.In summer 2006 a research on representatives of Krakow’s households was conducted. The results revealed citizens’ acceptance for the idea of introducing new leisure related mobility services. Later in 2007 and 2008 after restart of the service MPK was continuing the process of service eval