A new focus on walking and cycling in Warsaw. Poland 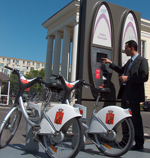 The enormous increase of traffic in Warsaw forced the city to react and take action, including the implementation of new facilities for cyclists and pedestrians.

Warsaw is one of the fastest growing metropolitan areas in Europe with a current population of 2.4 million. The prosperity following the modernization of the city after the fall of the USSR has led to a massive increase in traffic volumes. Solutions to this growing concern have been found in supporting sustainable transport, especially cyclists and pedestrians. This is a new approach, which would not have been considered even a few years ago.

The first action taken by the city government was to join the ASTUTE Project (Advancing Sustainable Transport in Urban areas To promote energy Efficiency). A representative was sent to London and trained in mobility management and it was decided to focus the project on increasing the number of cyclists and walkers. From then on, roads were adapted to the needs of these two groups, bicycle racks were installed in front of public buildings and bicycle parking is now available inside the headquarters of the departments of roads and transport.>In the city centre, cyclists now have the possibility to use a lift that was previously reserved for pedestrians, as well as the option to take their bike on public transport. New lifts have been installed at metro stations and ramps have been placed next to steps. Furthermore, tunnels now ensure that cyclists can avoid very busy major roads, and a new secure park and ride provides card-accessible cycle racks. Finally, an ASTUTE conference was held in Warsaw to discuss these measures and other successful European schemes to promote sustainable transport.

Furthermore, In 2010, the city has also indicated an interest in building a public bike hire scheme, including 120 docking stations and 2000 bicycles.

The first steps to increase the sustainability of Warsaw’s transport system have now been taken. The coming years will reveal whether these actions have helped to reduce car traffic.