A new bicycle plan for the North Milan area. developed and tested by citizens (Italy) 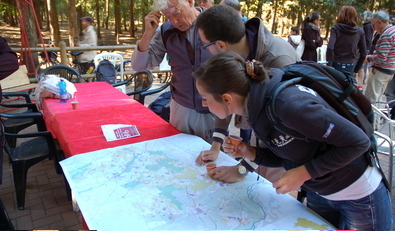 The bicycle plan for the North Milan area is one of the first successful attempts in Italy of developing a multidisciplinary and multisectoral bicycle plan. It is based on stakeholders’ direct involvement (for the construction of a shared strategic scenario) and on the concrete support of well-structured participatory processes (meetings, presentations and “in-depth cycling itinerary”).

One of the pillars of the bike plan strategy, the main aim of which is to promote and increase bicycle use for daily trips, is changing a weakness (scarcity of funds) into an opportunity (improve mobility, public health and environmental quality). In the current economic context, characterised by scarce resources (both for governments and for citizens), these actions may help to achieve a twofold target: to promote a soft mode of transport while reducing economic impacts (in terms of energy consumption, operating costs and infrastructure charges). Another three strategies have been formulated alongside the one described above: maintain existing routes focusing on safety, quality, identity and continuity of paths, enhance the landscape and further extend the cycling network beyond the pure parameters of the plan, exploiting possibilities of external connections with provincial and regional trails and main urban attracting poles, thus strengthening inter-modality.

A group of 17 towns (lead by the municipality of Legnano) in the North Province of Milan has been successfully coordinated by both the technical and political teams. In the early stage of the planning process, an on-line questionnaire on the plan website and a related blog have been implemented in order to define the state-of-the-art and to collect citizens’ proposals and suggestions. As far as citizen participation is concerned, tailored initiatives (“in-depth cycling itineraries”) have been used to test routes, discuss measures and collect new proposals.>The first “in-depth cycling itinerary” (called BicicliAMO) was organised in September 2011, with 70 citizens riding 45 km along the bike network and a second one took place in October (2011). Great consideration has been given to prioritisation : a set of actions has been carefully planned to be easily implemented as far as time, resources to be invested and administrative accomplishments to be fulfilled are concerned, in order to get prompt reactions and results. As far as communication is concerned, a web platform has been integrated in the institutional web-portal of the Province of Milan.

From a political and institutional point of view, the strength of the Bike Plan is that it integrates the higher level -strategic bike plan for the Province of Milan “MiBici”- with the local level: the “Conference of Mayors” has proved to be the most effective tool for the coordination of policies.
On the other front, citizens were asked to specify their needs and problems faced in their daily cycling as well as to suggest their ideas to planners and local administrators. All proposals have been further integrated into the draft document: the final version of the plan was presented in early February 2012 to local communities. Sunday rides have also been important to show less-frequent cyclists the benefits of using bicycle paths for several mobility purposes: leisure, cycle tourism, home to work/school, etc.

The Plan can be downloaded here (in Italian)