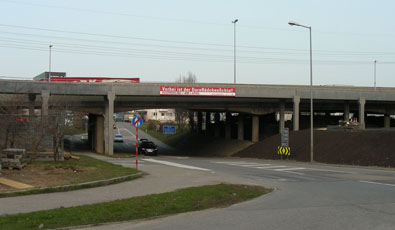 In the Lake Constance area 6 municipalities are working together with the consulting firm m-prove on regional mobility projects. A bicycle bridge was installed in spring 2009.

The local authorities of Vorarlberg aim to increase the bicycle traffic by up to 20% by the year 2015. In particular they want to encourage the public to use bicycles for short to medium distances. In order to reach this ambitious goal co-opertion between all local authorities is necessary. In the Lake Constance area the municipalities of Bregenz, Hard, Kennelbach, Wolfurt, Lauterach and Schwarzach are working together with the consulting firm m-prove on regional mobility projects entitled ‘plan b’. To ensure the safety and security of bicycle users and to improve the accessibility of this main cycle route (which included several obstacles such as different road junctions, the motorway and a river) a bicycle- and footbridge has been installed.

The bridge is 3.50 meters wide and approximately 130 m long. It is made of high quality concrete, thus reducing maintenance costs. The bridge elements were prefabricated and mounted on site. Far over a thousand visitors witnessed the opening of the bridge by fine weather. As well as the bridge inauguration the beginning of the cycling season “Radfrühling” was celebrated. Cyclists came on the main road with a police escort from the above mentioned villages. After the bridge opening there was an interesting supporting programme with an unicycle performance, a second-hand bicycle exchange, trial rides of an electric bicycle (LANDRAD), etc.

By upgrading this bicycle route with the bridge a signal was set that the importance of safety and security for bicycle users in the Vorarlberg region is recognised and that bicycle use is strongly desired in this area.