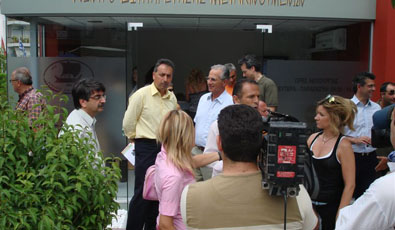 The aggravating traffic congestion in the city of Thessaloniki, the second largest city in Greece, called for a series of actions to alleviate the every-day mobility problems faced by the citizens who live, work and move within the city.

The Regional Energy Agency of Central Macedonia (REACM) of ANATOLIKI S.A. took the opportunity to create the first mobility center in Greece under the EU project "MOBI-NET" of DG-TREN's "INTELLIGENT ENERGY-EUROPE" Programme, contributing in sustainable mobility measures in the city.

Contract agreements were signed among the stakeholders involved in the Local Support Group namely the Municipality of Kalamaria, the Transport Authority of Thessaloniki and ANATOLIKI S.A. The agreements define the action plan and actors' commitments for establishment and operation of the Mobility Centre.

The first “official” meeting of local support group took place on October 2007 at the Municipality of Kalamaria.>Potential services providers and users of Mobility Center were identified and the schedule for establishment of the Centre was set. Moreover, a plan to raise awareness in secondary education was elaborated.

An open discussion on the establishment and operation of “Mobility Centre” of Kalamaria at the Head office of Transport Authority of Thessaloniki aimed to inform public and private organizations and Representatives Airport Authorities, Railways and Urban Transport Organizations, interurban bus enterprises and local municipalities were informed and were invited to offer their services through the Mobility Center to be set up in Kalamaria.

Support and cooperation was formally offered the Hellenic Railways (HR), the Hellenic Institute of Transport (HIT) and three inter-urban bus operators (KTEL) which provide services to neighbouring cities with their fleets. The e-platform has been accomplished in collaboration with the HIT.

Activities include promotion of the European Mobility Week, presentations to local authorities and educational institutions to raise awareness on alternative modes of transportation and inform about the services to be offered.

During its first months of operation, the M.C has been very well accepted by the citizens.

ANATOLIKI S.A-REACM is planning to extend the operation of the center after the completion of the MOBI-NET project and apply the know-how to the creation of other mobility center's in Greece and neighbouring countries.