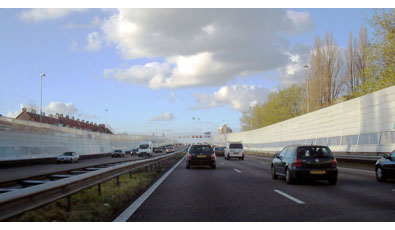 Rotterdam’s suburb Overschie suffered from pollution of the motorway A13, to improve air quality the speed limit on the motorway got reduced from 120 kph to 80 kph.Due to the measure the air quality improved, traffic flows more homogenous and the number of accidents decreased by 60 %.

A 13 motorway was chosen, because the huge amounts of traffic (150,000 vehicles daily!) disturbed the air quality in the suburb Overschie, which is cut through by this motorway. A study of the Municipal Health Service came to the result, that residents are polluted in a way, as if they smoked 16 cigarettes a day. The aim was to improve life quality in Overschie by reducing emissions and noise through a slower and smoother traffic flow. The reduction of greenhouse gases was observed to be an ancillary effect.

In 2002 the 3.5 km long part of the A 13 got limited to a speed of 80 kph. Key stakeholders instrumental in the implementation and operation of the measure included the Ministry of Transport, Municipal Health Service, Department of Public Works, Rotterdam City Council, local members of parliament and residents.
To guarantee high compliance to the speed limit, the cars are observed by various cameras, which make it possible to calculate the average speed on the stretch. If the driven speed is too high, the car owners are fined automatically.
Approximately 1.2 Mio € were spend to set up the system.

Reduction of emissions (year before compared with the year after implementation):

Reduction of imissions within a range of 200m to the motorway:

The social benefits from the lower NOx and PM10 emissions are estimated to be about 1.56 Mio € within the next 10 years. The positive effects from lower accident rates, lower noise level or lower CO2 emissions have not been calculated yet.

Public acceptance is high especially within the group of residents of Overschie. Drivers accept the measure because the road quality kept the same and the speed compliant driver does not have to bear extra costs.

Basically this measure can be implemented in other cities and countries as well.
Planners should recognize that the scheme will be more effective, the higher the previous speeds are and the longer the stretch is.
Nevertheless there can be problems with legal issues of the automatic measurement. In the Netherlands the car owner is responsible for paying the fine, in countries in which the car driver is responsible, technology has to be developed to identify the drivers.
Another important point to be considered is that the technique is ineffective if the modal share of heavy duty vehicles (HDVs) is very high. In Overschie HDVs have a traffic share of 10 %, but cause 50% of the pollution. Due to the fact that HDVs still had an 80 kph speed limit, they do not contribute to pollution reduction.
In summary the positive effects, the good acceptance and the moderate costs of the measure make it desirable to be copied.