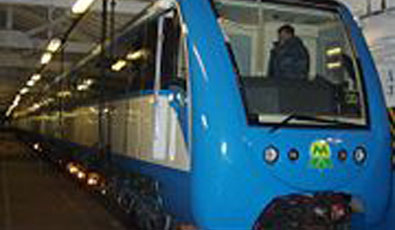 The Kiev metro system is undergoing extensive regeneration and expansion to accommodate an increase in passengers and make the system user-friendly for all travellers.

The Kiev metro system is the mainstay of the capital’s public transport system accounting for 34% of the public transport share and carrying 1.7 million passengers daily. Presently, there are 45 stations of which almost half are deep level and the rest sub-surface. The metro is managed by the state-owned city municipal company Kyivsky Metropolitan which was privatised in the early 1990s from the Ministry of Rail services.

The Kiev metro is under great burden with trains often over-crowded, especially at rush hour and the old rolling stock liable to frequently breaking down. The plastic token ticket system is outdated and causes long queues at ticket booths and does not facilitate ease of passage through the stations. In addition, the classic architecture of many of the old stations are not conducive for those with disabilities.

The European Bank for Reconstruction and Development (EBRD) has provided loans to Kyivsky Metropolitan and Kyivky PasTrans of up to €40 million and €60 million respectively to support service upgrades. The funds are being used for service improvements as well as the acquisition of new underground trains, buses and trolleybuses.

In the mid-late 1990s construction began on expanding the older Syrets district in the North-West of the city. All new stations constructed were made accessible for those with disabilities and existing stations were adapted where possible.

Old rolling stock has and continues to be replaced with modern more efficient trains.

In 2004 ip.access.ltd signed an agreement with Ukrainian company Proximus to install GSM basestations in underground sections of the Kiev Metro. This meant that Kiev Metro was one of the first underground systems in the world whose passengers could use mobile phones whilst underground.

Turnstiles have been installed near metro exits in order to accommodate the new radio-frequency identification (RFID) card system. A new pricing system will set prices according to the distance travelled and the system is due to go live in 2008/09.

New stations have been opened in the Syrets district in 1996, 1997, 2000 and 2004 and most recently Vyrlytsia station in 2006. Further expansion is planned along several lines to take the Kiev Metro closer to the city boundaries with the track doubling in length and stations totaling 100 by 2030-35. Much of this proposed expansion will come from the loans made by EBRD and will be, in part, complete in time for the European football championship in 2012 which is being jointly hosted by Poland and Ukraine. On December 15, 2010 three new stations (Demiivska, Holosiivska, and Vasylkivska) were opened in the direction of Teremki. Subsequent extension is not announced, but will include two branches with five stations in total.