Mobility Management at Kindergartens to promote cycling in Graz (Austria) 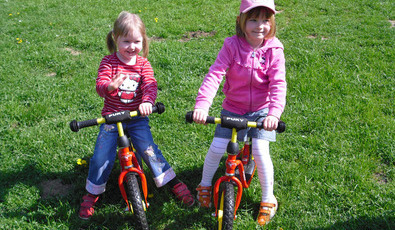 An educational program was designed and implemented with the aim to promote cycling for Kindergarten children.

Like many other countries, there is a dramatic decrease in the physical activity of children in Austria. This (often) leads to obesity, lack of co-ordination abilities and consequently to a higher risk of being involved in an accident. This is compounded by the fact that many children are driven to kindergarten in their parent’s car.

Kindergarten age is the perfect age to raise children’s enthusiasm for cycling and walking and to influence the mobility behaviour in further life. Children who have a positive attitude towards these ways of moving tend to ‘educate’ their parents to use bicycles more often because they are affected in an emotional way.

Within the EU-project LIFECYCLE a kindergarten programme was developed that consisted of:

The main goals of this kindergarten program were to:

At the end of the program was carried out by organising a creativity competition among all participating kindergarten groups. They had to design a sculpture on cycling, with the best sculptures receiving prizes.

Following this initial success, the programme will be offered to kindergartens as a regular annual event. This program is easy to apply and has a very good cost-benefit ratio. The approach to combine emotional elements (story telling) and training of skills (e.g. balance) proved to be successful. The method can be easily transferred to other cities.