Mobility and traffic management in firms in Valjevo. Serbia 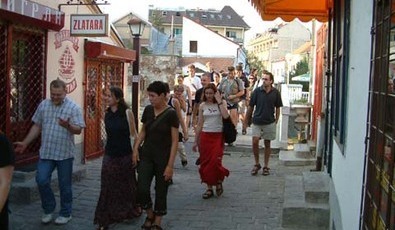 During the rush hour, streets in the city centre are overcrowded. It is also difficult to find a parking spot for a private vehicle. The city is expanding in several directions, and commuting to and from work is beginning to become a big problem for workers. Many companies, public and private, have undertaken initiatives to solve this problem. A team of experts analyzed the situation, and their conclusion was to implement better public transport, involve private companies in transporting workers to their place of work, and encourage alternative transport modes to improve the traffic situation and the environment.

The centre of Valjevo houses many important public companies, as well as several municipality buildings; the private sector is mainly concentrated in the industrial zones. This results in a lot of commuting by car. This created a problem with parking in the city centre. The high volume of private vehicles endangers the environment and creates high levels of noise. A solution for the current situation would be a reduction in vehicle numbers and encouraging alternative modes of transport, improving the quality of life in the city.

A team of experts has concluded that in order to make any of these goals feasible, the first step is to re-organize public transport (by budgeting for improvements, and providing monthly tickets for all employees).

Some companies like Vujic Valjevo, the Golden Lady factory, the Bossis company, etc. have engaged private companies for transport of their employees.
Some of the companies used an own budget for monthly tickets to encourage bicycle usage, in order to come to work safer, healthier and on time.

The measures implemented soon took effect. Employees had fewer problems commuting to and from work, the number of vehicles was decreased, and this has had a positive effect on the environment.