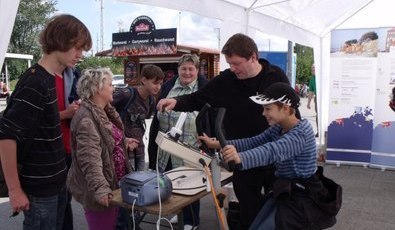 Sustainable mobility, climate change and alternative energy were the keywords of Climate Action Day “Mobile for the Climate in Rostock” in September 2011 which was organised during European Mobility Week.

Rostock decided well in advance that the 2011 Climate Action Day would focus on the most pollution-free means of transport - the bicycle. During the day many activities were offered to the public and altogether 800 people participated. The activities were specially designed to appeal to people of all ages.

During the day different activities took place on the streets. Young visitors had the chance to test an energypower-bicycle to see whether they could bring water to the boil purely by using muscle power. The adult visitors were able to test a Pedelec, an electric bike. Visitors also had an opportunity to have their own bikes encoded by the local Road Patrol, obtain good deals at a large bicycle auction and get to know the new hybrid buses introduced by the local transport operator.

The whole day was a celebration of biking. Several awards were presented to show that the city of Rostock truly supports and encourages biking and that it should be seen as a respected way of travelling, as good as any other. During the afternoon winners of the two bicycle competitions “City Cycling” and “Rostock’s Bicycle Friendliest Enterprise 2011” were awarded. These prizes were financed with the help of the Union of Baltic Cities.

As part of the activities the Hanseatic City of Rostock took part in the Climate Alliance project “City Cycling“ for the second time. This time Rostock tripled both the number of participants and the number of kilometres covered. In 2011 around 370 members in 27 teams travelled more than 47000 km on their bikes and saved (in comparison to equivalent car use) 7 tons of CO2. The best cyclists and teams were awarded prizes during Climate Action day by the Hanseatic City of Rostock.

The theme of the day was that if people can participate themselves in different activities, then the message that biking is both supported and fun will be delivered more effectively. The experiences and feedback were so positive and encouraging that the Hanseatic City of Rostock is planning to continue the tradition of a public Climate Action day in future.