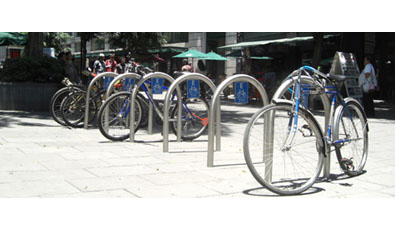 In 2007, Mexico City Mayor Marcelo Ebrard launched an ambitious 15-year eco-action policy called “Plan Verde” (Green Plan) to address many of the city’s woes. Taking lessons from Bogota, Columbia, Plan Verde is addressing city transit issues, in part, with bikes. The capital’s Bicycle Master Plan aims to increase bicycle trips to 5% of daily trips made in the city by 2012.

In an effort to get people to use their bikes instead of their cars, the government of Mexico City is building bike parking as part of the city’s Bicycle Mobility Strategy. The Institute for Transportation and Development Policy (ITDP) Mexico provided advice to the city government for the design and location of bicycle parking facilities along streets and at mass transit stations.

To start, the city purchased 2,500 bicycles to give free to residents who complete a bicycle safety course. The bikes are city-friendly with a low frame for men and women, a basket, fenders, a rack, a bell, and reflectors. But more bikes means more need for biking facilities.

Bike parking is also being integrated with mass transit stations, beginning with the station Metro Auditorio. This station at the National Auditorium, one of the most important concert halls in Mexico City, is a signal from the government about the status that it is conferring on cycling. This facility has the capacity for 48 bicycles. Ramps on stairs are placed to help cyclists carry their bikes up or down the stairs to reach the parking facilities in the station.

The city is giving a message of respect and recognition to the cyclists with these types of facilities. Cyclists know that they have a place in the city and their vehicles are important too, especially when the location of the parking is in the right place.

This project is a fundamental part of the Bicycle Mobility Strategy. Close to 1,000 bike racks will be installed in the city this year. Locating the initial bike parking spots in the city center is also part of the city’s efforts to make this area more pedestrian friendly and slow traffic down. Integrating bike parking into existing transit hubs and stations and other important destinations is the next step. The facilities at the metro station Auditorio are also part of the city’s strategy to continue improving Avenida de la Reforma as the most beautiful avenue in the city.
ITDP Mexico advised the officials responsible for purchasing the bicycles about the appropriate physical characteristics that the bikes should have. A city bike was developed with special characteristics (low frame for men and woman, city bike wheels, basket, fenders, rack, bell, hand brakes and reflectors) to ride safely and comfortably in the city.
Photo: Hector Puebla, ITDP Mexico
Update 2011:
Recent problems with allocating government funding for non-motorized transport and no recent information on developments in bike parking facilities.
"Mexico City’s government pledged in 2007 that it would build 300 km of bike lanes around the city by 2012. However, the city still only has 22.2 km because most money is allocated to car infrastructure, leaving aside non-motorized mobility."
Source: November, 2011, How Citizens Built their own Bicycle Network