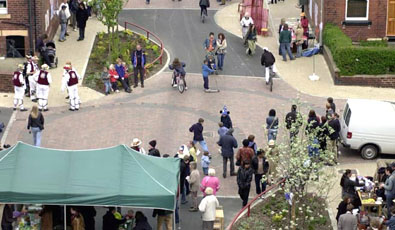 The Methleys case study is one of the first UK pilot Home Zone schemes.

The ‘Methleys Home Zone area’ contains about 300 residential properties and houses about 700 residents. The area is arranged in a compact grid pattern of 14 streets is located in Chapel Allerton in the North of Leeds city centre. Before the scheme was introduced, most of the streets were relatively wide (7 to 8.5 m), pavements narrow (1.7 - 2m wide), the area experienced significant on-street parking, through traffic by non-residential vehicles and congestion in parts, specifically during school pick up/drop off times.


To address local residents concerns, the main objectives of the home zone implementation were to:

The main features of the scheme included;

This case study (along with other UK Home Zone initiatives) demonstrates the successful transferability of Dutch ‘Woonerf’ (living yard) principles to the UK, and following the success of the scheme (and other pilot schemes) a further 61 further home zones schemes have/are to be funded as part of the UK Home Zone Challenge Initiative.