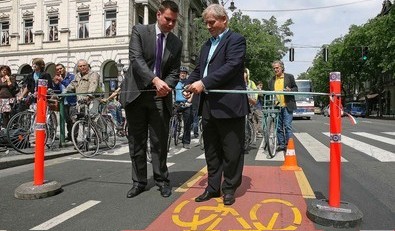 Following extensive consultations with cyclist associations and an elaborate redesign process, one of Budapest’s most dangerous bike paths was reconfigured for the benefit of all road users. The measure demonstrates that the creation of an attractive environment for cyclists, careful planning and consultations are often more important than expensive investments.

The Andrássy Avenue is a world heritage site – it is a beautiful avenue in central Budapest surrounded by historic palaces of high architectural value. In the middle it has a 2x2 lane road, then a strip of car parking and – until recently – a bike path between the parked cars and the sidewalk. Until now, this partitioning of road space has created many inconveniences and dangerous situations for cyclists – being hit by opened car doors on the right-hand side, bumping into curbside garbage bins or not being noticed by car drivers in intersections when turning right. Originally intended to cater for safety and also prescribed by legislation, following numerous complaints from cycle lane users this dangerous road space allocation was finally reconfigured in 2012, along with a large number of other interventions.

The most important change was that the cycle lane was repositioned between the parking lane and the car lanes and, in spite of earlier assumptions, this configuration has proven to be much safer than when cyclists are out of the view of other road users (e.g. car users, pedestrians or garbage collectors).>A proper distance was also left between the cycling lane and the parking lane so that opening car doors can no longer hit cyclists. Right-hand turns at intersections were also reconfigured so that car drivers first have to carefully consider and cross the bike path, before they can take a right turn.

Traffic lights were also reconfigured. Unlike before, cars and cyclists can now get a green light at the same time, leaving more time for crossing intersections and eliminating the need to press buttons when wishing to cross an intersection. Wherever it was possible, the stop-line for cyclists is ahead of that for cars, giving them advantage and visibility at starting.

A particularly visible change was that the cycle lanes were all painted with high-quality red paints, after resurfacing the tarmac (asphalt). Bus bays and taxi stations were also reconfigured and car parking spots were relocated.

These long-awaited interventions have received great media publicity and were praised as a major improvement in one of the busiest cycle thoroughfares of the Hungarian capital. The Municipality of Budapest and the Budapest Transport Centre continue the revision of improperly designed cycle paths in the city. In the next phase, the continuation of the above described bike stretch will be reconfigured.  This will involve the improvement of a section where pedestrians (tourists) and cyclists have to share a roadspace – an approach which by now has proven outdated.