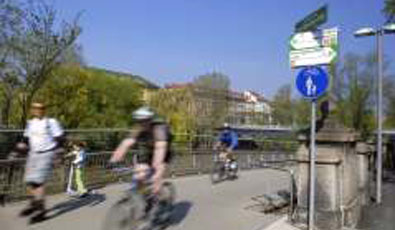 During the Bicycle Focal Point 2007/2008 13 main bicycle routes were defined in Graz, connecting the regional capital directly and efficiently with the surrounding municipalities. This enabled the definition of a greater bike path network that is comparable to highways for cyclists.

Due to mounting problems caused by individual motorized traffic the province of Styria consciously decided in 2007/2008 to focus on bike traffic. Apart from image raising and marketing also cycling training for children and a survey to determine the satisfaction of cyclists are further aims to improve the bicycle infrastructure step by step.For that reason, 13 main bike routes were defined. A new and innovative signposting of these routes is supposed to enable bicycle traffic without a city map and to design it in a fluid manner for work, leisure and shopping traffic alike, as well as to achieve an optimal connection between city centre and suburbs and the surrounding

In 2003 the planning of 13 new main bicycle routes was carried out by a group consisting of the State of Styria, the City of Graz, the working group for environmentally friendly urban traffic (ARGUS), surrounding municipalities of Graz and Austrian Mobility Research. Criteria for a later selection of the main routes were defined in a workshop. These are:Further>the routes should:While defining the main routes attention was paid to choose routes along already existing infrastructure, so that it could be used by the cyclists immediately and wouldn’t depend on the success of new construction projects.The main routes have priority where maintenance is concerned, are cleared quickly from snow and ice during the winter months and are optimized gradually.To draw the attention of the public to these routes and to increase the visible presence of bicycle traffic in the City of Graz and the nearer surroundings, a new and concise guidance system was developed together with ARGUS. The instalment of the new guidance system along the 13 main bicycle routes started in October 2008.In addition, these new main bicycle routes will be included in the new edition of the bicycle map from Graz that will be published in April 2009.

By upgrading the new main bicycle routes the bike is further promoted as an alternative to the personal car. Moreover, it is a signal that bikers are not simply tolerated but strongly desired in Graz.
Topic:
Walking and cycling
Archive
Country:
Austria
City:
Graz
Contact:
Günther Illek
Author:
Günther Illek
Keywords: