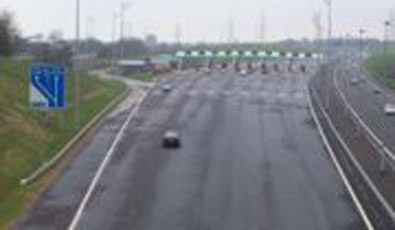 The M6 Toll is the United Kingdom's first toll-paying motorway. The scheme was introduced to alleviate the increasing congestion on the M6 through Birmingham and the Black Country, in England. It connects the M6 (Junction 4) at Birmingham to the M6 (Junction 11A) at Wolverhampton, with 27 miles (43 km) of three-lane motorway. This busiest section of the M6 was previously carrying up to 180,000 vehicles per day when it was designed to carry only 72,000.

The privately financed M6 Toll Motorway opened in December 2003. User charges are dependent on where motorists enter the toll road, class of vehicle and time of day. As 2011 daytime charges (06:00- 23:00) are;

Exit/entry at some of the intermediate junctions away from the main toll booths entails a reduced toll, typically £1 less than the full fee. Tolls can be paid by one of four means: automated coin payments, payment at a staffed toll booth, automated credit/debit card payments or in advance via an’ M6 Toll Tag’ (electronic reader attached to windscreens using microchip technology, which offers users a 5% discount), although, not all methods are available at all toll gates.