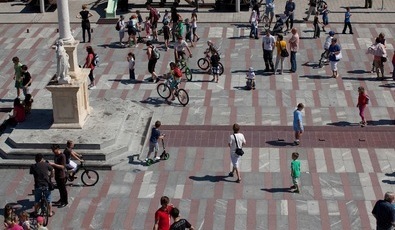 The municipality of Ljutomer is the first small Slovenian municipality with a sustainable transport strategy. In 2013, Ljutomer was announced as one of the three finalists for the European Commission’s first Sustainable Urban Mobility Plan (SUMP) Award, which focused on stakeholders and citizen participation.

The municipality of Ljutomer faces a number of transport challenges including an overly car-centric focus within recent planning practices, decreasing use of public transport and freight traffic issues. On top of this, in common with many other central European cities, Ljutomer is threatened by a decrease in its population.

In order to halt population decrease and to improve quality of life, the municipality decided to put effort into creating a more balanced travel pattern, improving the quality of alternative transport modes and decreasing traffic fatalities. With sustainable urban transport planning, Ljutomer aims to become the leading small municipality in Slovenia in sustainable mobility by 2016.

Ljutomer’s first SUMP was developed in 2011, adopted in June 2012 and began implementation in October that year.

Traditional transport planning in Slovenia has been criticised for limiting citizen engagement to viewing and commenting on previously developed projects just before their implementation. Offering insights into projects at a very late stage does not allow for major adaptation or genuine reactions to comments. Ljutomer’s SUMP, in contrast, engaged residents at an early stage and was characterised by a compromise-focused approach.

Ljutomer’s SUMP development process drew on methodologies set out in national and EU guidance. European co-funded project results were consulted (including the PILOT, BUSTRIP, CIVITAS Elan and Eltis projects) as a source of experience and methodology.

Activities carried out within the framework of the SUMP preparation included: participation in the URBACT project “Active travel Network” to promote active modes of transport, an active travel audit based on BYPAD, 27 in-depth interviews with stakeholders and events targeting citizens such as the “Day of Active Mobility” which featured bike checks, games, competitions etc.

Citizens were further informed and involved through local newspapers and on the radio, a leaflet and household survey sent to all 4.200 households in the core city and information on current activities through the website.  The budget needed for the activities was low: for example, to carry out 27 stakeholder interviews only EUR 500 was spent and EUR 3000 for the active travel group including the “Day of Active Mobility”.

The early inclusion of residents increased people’s interest and main problems were identified early and easily. There was enough time to find compromises and, as a result, the final mobility plan was well accepted and widely supported.

Being shortlisted for the European Commission’s SUMP Award focusing on stakeholder and citizen participation, Ljutomer is contributing to developing a culture of citizen engagement in Slovenian mobility planning. The award jury remarked that “Ljutomer proves that even with a limited national history in participatory planning, developing an ambitious SUMP is possible…For a small town of only 12 000, a remarkable number of actions have been undertaken”.