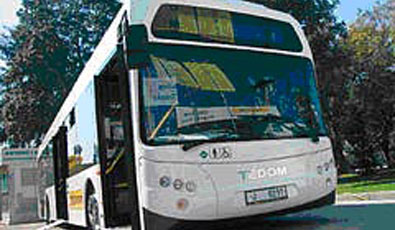 Since October 2008 the Municipality of the Bulgarian Black Sea city Bourgas is operating the first LNG buses on its public transport network. The buses, produced by the Czech company TEDOM have very low emissions levels and meet the EURO 5 requirements.

Bourgas is not only one of the most important industrial Bulgarian cities, but also a famous touristy centre, situated on the Black Sea side. During the summer season a large number of tourists from many European countries join the 210 000 local inhabitants and the road traffic intensifys correspondingly. That is why the Bourgas Municipality is taking measures aiming to increase the role of the public transport and to reduce air pollution. One of them is the operation of new LNG buses.

The first delivery of 5 brand new buses was made in October, the second group of 5 vehicles arrived in December 2008. The buses are produced by the Check company TEDOM. Their diesel engines are specially designed to be operated with LNG. They have very low emissions level and meet the EURO 5 requirements.>On 4 December the City Mayor and the President of the company Bourgasbus which operate the buses officially put the new 5 buses in operation.The buses:

The experience, accumulated not only in Bourgas, but also in Sofia and Plovdiv, where the same LNG buses are operated, has proven that they are very efficient from both environmental and economic point of view. On the other hand, thanks to the modern design and high comfort offered to the passengers, these vehicles are already very popular and their implementation is an obvious success.Economic efficiency:Exhaust gase emission levels:
Topic:
Clean and energy-efficient vehicles
Archive
Country:
Bulgaria
City:
Bourgas
Contact:
Dimitar Stoyanov
Contact:
Dimitar Stoyanov
Author:
Dimitar Stoyanov
Keywords:
drive train – internal combustion engine modified
fuels – gaseous non regenerative
reduction – air pollutants - ICE internal measures
reduction - noise