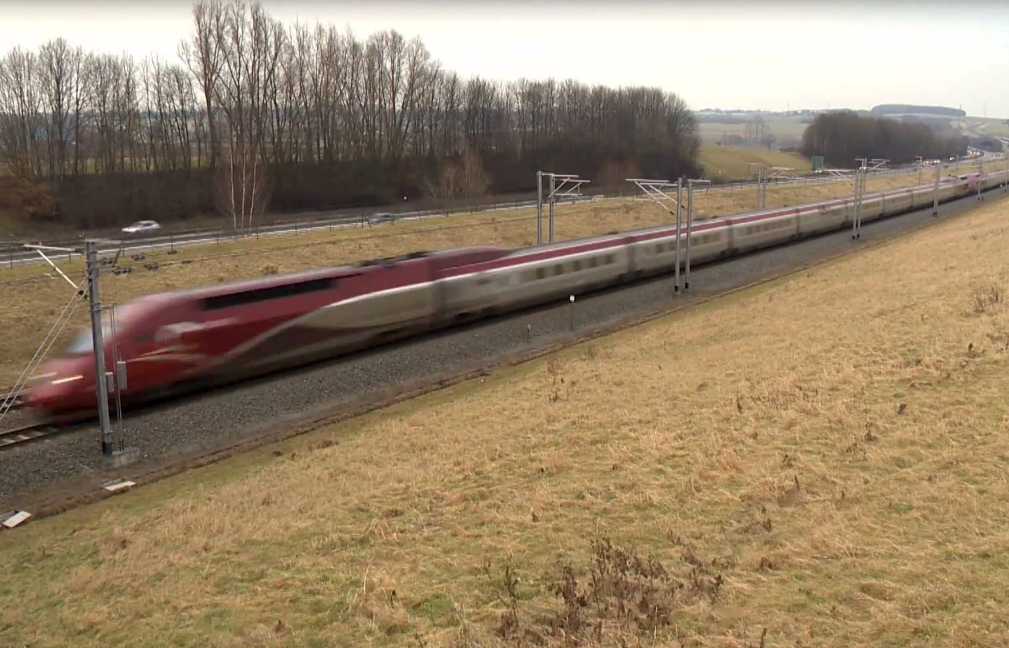 Infrabel, Belgium's public railway operator, has put the new Diabolo rail connection to and from Brussels Airport into commercial use. This final stage results in direct trains between Brussels Airport and major Belgian and foreign cities. In practical terms it means that passengers coming from Antwerp no longer have to travel via Brussels to reach the airport by train.

Air traffic plays an ever increasing role in passenger and freight transport. For a smooth transition of the huge flow of passengers and goods to and from the airport, optimum accessibility is crucial. Infrabel has invested in the development of a superlative rail connection for the Belgian airports. Brussels Airport is one of Belgium’s largest economic industrial hubs, accommodating thousands of train passengers travelling to and from Brussels every day. Sustainable and customer-friendly mobility to and from the airport had become an issue in recent years.

The Diabolo project turns Brussels Airport into one of the most accessible airports in the world. The airport will have a direct connection with the large axes of the Belgian railway network and with different European cities via the international axes of the bordering countries: The Netherlands, Germany and France. More precisely it involves the axes Frankfurt–Brussels–Paris and Amsterdam–Antwerp– Brussels–Paris.

Diabolo guarantees optimum connections between air and railway transport. The project is not only comprehensive but also very complex, with intermodality and multifunctionality at the heart of it. Building on the Belgian high-speed network commissioned in 2009, it now gives Brussels Airport a renewed strategic position at the heart of Europe. Three key priorities were established:

RAILWAY: A number of new railway lines were installed. At Brussels National Airport station, a new underground railway track runs via the Diabolo tunnel to the new railway line along the central reservation of the E19 between Schaerbeek and Mechelen (L25N). Here a total of 10 bridges have been modified and/or constructed, including a spectacular 820m-long Iris Viaduct to connect with Brussels.

TUNNEL: In October 2007, TUC RAIL began digging a tunnel underneath Brussels Airport while enabling the airport to remain fully operational. This tunnel, which is a technical achievement, links the station to the north of the country. The tunnel starts at Brussels Airport station (cut-and-cover tunnel approximately 400m long ) and then travels under the runways (bored twin tunnel 1070 long). At a depth of 16 metres below the Brussels Airport runways, the tunnel-bore machines Danté and Niña dug the 1.07k-long tunnels at an average speed of 13m per day.

STATION: The renewed train station has grown to seven times the size of the previous one and guarantees a perfect match between air and rail transport for an increasing number of Belgian and international travellers. The airport train station is located below the terminal (basement level -1) and provides direct train services to Brussels, Leuven, Mechelen, Antwerp and several other major cities with only one transfer.

The total investment is circa € 678m (€ 138m more than originally estimated). The rail link between Schaerbeek and Mechelen is financed by Infrabel, while the section of tunnel is financed for € 290m by the Northern Diabolo S.A. consortium via a PPP. After completion of the project, Northern Diabolo S.A will be awarded the concession for the infrastructure for a period of 35 years and will make the infrastructure available to Infrabel during this period. The consortium will receive a levy on each ticket sold to cover its financial investment. At the end of the 35-year period, the infrastructure will automatically revert to Infrabel’s ownership. The project has so far received almost € 10m in trans-European transport network (TEN-T) co-financing.

The so-called 'Diabolo fee' needs to be paid by every individual traveller with a destination to or origin from the airport railway station. It was decided by law in 2007 that the NMBS rail company needed to collect this fee and provide the revenue to the Northern Diabolo S.A. The fee started in November 2009 at € 2.05 per ride; in July 2012 this will increase to € 4.30. The price is immediately included when buying an inland ticket - but when travelling by pass, free ticket or a Eurostar, Thalys or other high-speed ticket, the fee has to be acquired as a separate ticket.

Diabolo changes Brussels National Airport into a fully-fledged international railway station, as in Amsterdam (Netherlands) or Paris (France). The airport station was previously only a terminus, linked only to the Brussels-Leuven line. Now up to four trains an hour connect the airport to Brussels, but there are also direct train services to the east, south and west of Belgium, significant increases to the network facility and decreases in travel time to and from the airport by train. The journey time from Antwerp and Mechelen stations to the airport will be reduced from 60 to 30 minutes and from 40 minutes to 10 minutes respectively.

This is not a stand-alone project. The rail bypass is also crucial for the Regional Express Network, which will contribute to considerable improvement of mobility in and around Brussels. The future railway connection Schuman-Josaphat is a key component in this project: it ensures a direct connection between the European quarter and Brussels Airport by the end of 2015. Finally, an additional railway bypass in Mechelen will be the next step to further increase rail capacity on the Brussels-Antwerp line by the end of 2015. Infrabel is also planning two additional tracks and two new platforms at the back of Mechelen station as part of the Mechelen station project.

There is further room for improvement. TreinTramBus, the passenger organisation representing Flemish passengers, has made a plea for a swift increase of the service, namely more trains and an extended timetable. In June 2012 the first direct train from Antwerp arrived at 07:16 and the last one to Antwerp left at 21:44. Compared to the Dutch Schiphol Airport, where there is a 24-hour train service, this leaves a gap in service for many travellers with early or late flights.

The organisation also regretted that the ticketing fee was not included by having a € 0.40 fee with every plane ticket, which is a marginal cost for those tickets. This would have freed the users of the most sustainable means of transport from the € 4.30 fee, which is considerable for small distance journeys and sometimes even costs more than the actual ticket itself.

The project is funded by the Belgian Federal Government with the financial support of the European Union. Diabolo forms a unique link in the Belgian, but also European, railway network.