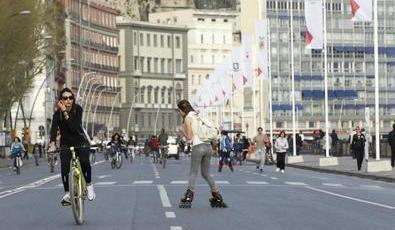 In April 2012 the city of Naples hosted the fourth regatta of the America’s Cup World Series. A special mobility plan was adopted including a wide pedestrian area all along the “Lungomare Caracciolo”, the scenic city seafront. This pilot is now turned into a definitive measure.

Naples is the third-largest Italian city after Rome and Milan with a population of about 1 million inhabitants (3,5 million in its metropolitan area). Its environmental context is of particular relevance and sensitiveness and the landscape is also of outstanding beauty. The city has an extended public transport network made up of metro, tram and bus lines as well as urban lifts and cable railways that helps in dealing with different altitudes. Nevertheless, the city has traditionally suffered from chaotic traffic of cars and scooters that makes it hard to enjoy the city as a pedestrian or as a cyclist.

In April 2012, the city hosted the fourth stop of the 2011-2012 America’s Cup World Series and for that occasion a special Mobility Plan was adopted by the municipality: it included significant traffic restrictions and diversions, a Special Limited Traffic Zone as well as special provisions for public transportation and parking. The plan was a real challenge also because of the chosen event location: not outside of the city but in its central and scenic seafront along the “Lungomare Caracciolo” where a wide pedestrian area was established with closure to motorised traffic of two main roads, Via Caracciolo and Viale Dohrn, from Piazza della Repubblica to Piazza Vittoria and Via Partenope (around 2 km).

Such revolutionary traffic provisions were successful during the America’s Cup and the car-free initiative along the seafront was again proposed during the summer period. Thanks to cooperation between the Municipality, the local Chambre of Commerce, several artists and the Borgo Marinari Association, a great variety of events and activities animated the summer in Naples. The idea was to promote the seafront as the happening “Stage of the Gulf on Naples”.

The benefits from these closures to motorised traffic for the city of Naples have been remarkable: the increase in livability, the reduction in congestion and pollution together with the increase in the average speed ofpublic transport average, convinced the Municipality to make the restricions permanent along the seafront with the aim of further exploiting its great potential.

The adopted measures were in line with the objectives set in the city’s General Plan for Urban Traffic (PGTU). In November 2012 the Municipal Council approved a “Piano Particolareggiato del Traffico” (Detailed Traffic Plan) with the provision of permanent restrictions to traffic by establishing three different but continuous Limited Traffic Zones (LTZ): the “LTZ of the Seaf” (that includes in its perimeter the pedestrianised seafront from Via Caracciolo to Via Parthenope), the “Spanish Quarters LTZ” and the “Tarsia/Pignasecca LTZ” (see this video).>This will be fully operational by 1st April 2013, when all cameras at electronic gates will be installed and access permissions will be distributed to residents. The “LZT of the Sea” will be in operation from Monday to Friday between 8.30 AM and 6 PM, while the other two LTZs between 7 AM and 6 PM. In the meantime (i.e. till 31st March 2013), current temporary restrictions will continue to be in force: from Monday to Friday between 8.00 AM to 2.00 PM.

The pedesetranisation and traffic restrictions have been accompanied by some additional interventions with the aim of increasing accessibility to the area (new parking areas for vehicles and an increase in service frequency of bus lines and of the cable railway of Chiaia). In parallel an intense participative process has been conducted: citizens and associations have been deeply involved and consulted in order to let them actively participate in the most relevant decision making phases of the whole process.  From July 26th, to October 27th 2012, over 30 meetings were organised among the relevant stakeholders (associations, citizens’ committee, restauranteurs’ and shopkeepers’ consortia, parking operators, tourist guides, council for taxi and car-hire with driver services, environmental associations, etc.) in order to present the new Detailed Traffic Plan and to receive proposals and suggestions.

Another significant step towards a general acceptance of the new traffic rules in the city centre has been made by the official and parallel launch of the Naples’ Cycling Strategy: the first section of a 20 km long cycle path crossing Naples east to west was inaugurated on 12th of November 2012 along the seafront of Lungomare Caracciolo.

The implementation of the LTZ has generated a great change in behaviour and cultural habits of citizens and tourists in Naples. The former six lane road that separated the city from its seafront sidewalk, is now enjoyable for pedestrians and cyclists. Thanks to this commitment of the Municipality, citizens are now aware of the potential of their seafront. The new public space is now a meeting place, a promenade to stroll, a place to ride a bicycle and enjoy, a place to visit the enlarged terraces and a place where many sporting events for local youth can be organised.

Though some complaints arose from involved restauranteurs and shopkeepers, the majority of the citizens reacted positively to the initiative, also by submitting a significant amount of suggestions and proposals. A photo contest “The Liberated Seafront” has also been organised with the aim of promoting the beauty of this part of the city.

All these actions contribute to achieving the overall objective of the administration, that is to support Naples in the process of becoming a real “European Smart City”, through a cultural and societal “revolution” towards sustainability and to sustainable mobility in this respect.