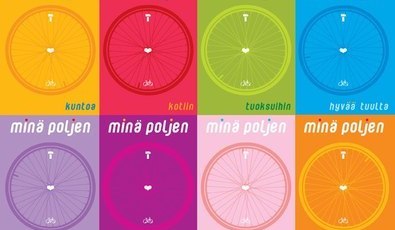 Tampere is determined to turn itself into a cycling city. In 2012 a large scale campaign called Minä Poljen (I cycle) was launched to promote cycling in the city.

The Minä Poljen campaign aimed not only to promote cycling in general but to raise awareness about the concrete actions the city implemented during 2012 in order to improve biking facilities in Tampere. The campaign started in May 2012 and the last activities took place in autumn. With a colourful and playful outlook, the campaign wanted to clearly convey the message that cycling is fun and supported by the city. The message was delivered at several events organised during the campaign.

The campaign was implemented by the city of Tampere and the ECO2 project coordinated by Sitra in cooperation with local bike associations and Ekokumppanit Oy.

2. Tampere offered a bike pump to be used freely by all travelling in the central area where the number of cyclists is the highest;

3. In May, during the Finnish national biking week, different events for cyclists took place including photo orienteering with bikes, a bicycle market and bike excursions to enjoy the surrounding landscapes;

4. The Tampere city bike system installed 3 new bike racks and more rental spots. During the summer it was possible to rent a city bike for 24 hours without pre-registering;

5. A new pedestrian and cycle underpass was opened. The outcome was an improved connection between the centre and one of the housing districts;

6. New features specifically for pedestrians and bikers were introduced to the route planner, including an updated version of the bicycle route map;

7. & 8. Two new cycle ways were finished in Autumn 2012 which improved the continuity of the cycle network in the city centre;

9. A new bridge connecting two old industrial areas was finished, along with a new pedestrian and cycling route;

10. The city awarded the best group from Tampere participating in the national Kilometer Competition.

Altogether the campaign organised or was present at 10 larger events, some of which included smaller sub-events. Over 2,000 people participated in the events and an even larger group was reached through the campaign website and social media. The campaign was highly visible on the streets and people were very impressed with the visual outlook of the campaign.

In addition to this, the number of cyclists has increased by 8 per cent in this cycling season (April – September) compared to figures for the previous year. This was naturally the main target. Tampere monitors changes in the bicycle modal share with 30 bicycle counters that have been placed around the city.

With the campaign the city wanted to raise awareness about the concrete actions that have been taken to improve conditions for cycling, and show that Tampere is highly committed to developing itself as a cycling city.