La Spezia and Magenta the first Italian cities to use bioethanol in bus fleet. 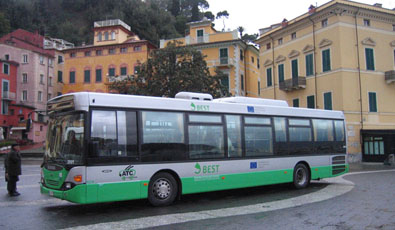 The local public transport operator of La Spezia is partner in the BEST project (Bio-Ethanol for Sustainable Transport). Aim of the project is the introduction of bio-ethanol-powered buses and the development of a draft standard for ethanol bus engines taking into account the experiences gained in the BEST project.

In all participating countries except for Sweden operation and demonstration of ethanol buses have met many problems initially:

One of the main problems by introducing bio-ethanol is the taxation. Ethanol has nearly the same taxes as diesel, but the engines need a much higher volume of ethanol than on diesel. Thus tax relief or exemption for the ethanol are essential, otherwise fuel costs will increase substantially and are not affordable by PT operators.

In the course of the project these obstacles could partly be overcome making it easier for follower in the paticipating countries to successfully introduce bioethanol buses as well. All necessary rules and regulations had to get in place before the buses could start running. In this process one of the most important steps was to contact the local authorities as early as possible.

Due to the lover energy content in ethanol ethanol vehicle generally need about 60 percent more fuel than comparable diesel vehicles (compared by volume). Thus tax relief or exemption for the ethanol are essential, otherwise fuel costs will increase substantially.

Since beginning of 2007 ATC operates three ethanol buses in the public transport line Sarzana -Lerici . The Buses use E95 bioethanol: 95% of ethanol from agricultural materials and 5% of additives. The bioethanol filling station is situated in the ATC depot and was newly build as part of the project. The Ethanol project additionally was extended to the local municipalities which use flex fuel cars running on E85.

The buses
The ethanol buses are standard Scania Omni buses with a 9 litres Scania compression-ignition engine. They are slightly modified to operate on E95 bioethanol bus fuel. This bus type has been used for more than 15 years in Stockholm in regular full-scale operation in tough city conditions. After this long time Stockholm Transport considers it a fully proven bus technology. The buses themselves are completely standard, using regular Scania components.

Important for bus operators is the lack of operational drawbacks as long as the scheduled maintenance requirements are followed.

The main reasons to choose bioethanol are connected to intended reductions of exhaust gas emissions and oil dependency, and, above all, the realization of sustainable public transport service.

La Spezia is still operating the buses (11/2010), in Magenta the company will be stopping operation.

The final report about ethanol buses gives advice on how to proceed to get the necessary permissions for the operation of bioethanol buses in place, as well as more information on applicable standards and regulations.