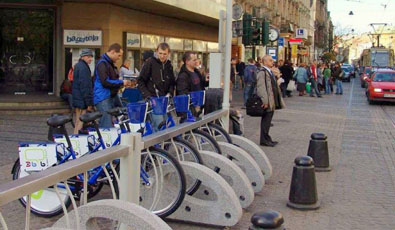 In 2009, a city owned bicycle renting system was established in the city center of Kraków. The system has been built based on the public transport system, to integrate those two modes of transport and promote intermodality. The BikeOne bike rental system has been developed and installed within 2005-2009 (under CiViTAS CARAVEL project).

Kraków now has about 70 km long bike paths system, but this system is not very well integrated into the city system. The modal split of bicycle trips in Krakówis (in 2009) at 2%.

Alongside recent study in Kraków of bike paths system, a public bike rental system was implemented in 2009 as a new feature of overall bike system in Kraków.

The main objectives of the measure were to promote a new "bicycle culture", to increase use of bicycles as a mean of transport and to integrate bicycle renting system with PT stops.

The stages of the BikeOne system in Kraków:

During the initial 5 weeks of system implementation, there was an average of 80 bike trips per day. The first 35 days saw a total of 2761 trips. There were 643 persons registered. 204 of them rented bike at least once. From the spring season 2009 number of users is growing rapidly.

In 2009 number of rental station increased to 16. With sponshorship, 20 more bikes were also put into the system. In the future it is intended to run and extend the bike rental system mainly with use of private funds.
As the BikeOne system has been implemented in Kraków in rather difficult conditions (winter!) it seems that it is easily replicable in other cities. It's features, like for example module - based station with ligth and movable construction (can be transported within few hours) make this system possible to adapt to other conditions.
Updates 2011:
As of 15 November 2011, the Bikeone - bicycle rental system in Kraków is suspended. The 3-year contract with the municipality, initiated under Civitas Caravel project, has ended. A new call for tender is planned in early 2012, for operation of the service in the new spring-summer season.
The city of Wroclaw has started a somewhat similar system (more information can be found here in Polish).
In 2009-2011 the number of rentals per month stood at 5.000 to 8.000.
Average per-day during this time-period: 150-170
From 2009-10 and 2010-11, an increase of circa 20% per year, in number of trips, was measured.
The system now has about 6.000 registered riders and 4.000 active riders.