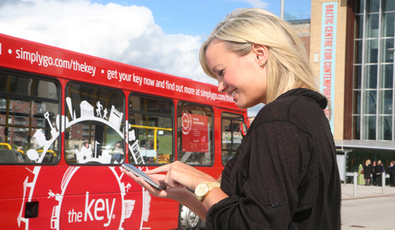 UK bus operator, Go North East has been at the forefront of the development of ticketing technologies for a number of years. In 2010 they launched a commercial smartcard scheme called ‘the key’ on behalf of Go-Ahead, which was then rolled out across all of Go North East in May 2011 and other Go-Ahead bus companies during 2011/2012.

Over the years, reducing the number of ticketing transactions on buses has been one of the transport industry’s ‘holy grails’. Most transport operators have made considerable progress with off-bus ticket sales with the development of weekly, monthly and annual season tickets helping to improve boarding times and reducing the inconvenience of daily cash transactions for bus users. More recently, smartcard technology and on-line purchasing have both played a major part in improving the overall journey experience for the customer.

Go North East is the largest bus operator in North East England, operating almost 700 vehicles and employing nearly 2,000 driving staff from 10 depots. The company has already had considerable success with its key smartcard. Extending the ‘key’ brand to a mobile smart - phone offering was seen by the company as being the next logical progression.

The introduction of mobile ticketing was a two-phase process.

First was the launch of the key mobile app:

- The key mobile app, developed by Komodo Digital (http://www.komododigital.co.uk/) based in Newcastle upon Tyne, is free to download, provides up-to-date travel information fed by the company’s social media activity and helps users to find their nearest bus stop and the departure time of the next bus using the GPRS technology in their smartphone;
- Customers can see the route and stops in a Google map and can talk to customer services via Facebook or a private web chat, as well as download timetable information;
- A further development will see the app capable of delivering live, real-time information, derived from GPS-equipped ticket machines installed on every bus.

The second phase was the launch of the mobile ticketing app:
- Developed by Corethree (http://www.corethree.net/), using their patented Core Engine platform, the mobile ticketing app has been custom-built for the Go Ahead Group’s bus operations;
- From its launch, the key mobile ticketing app was available with one day and seven day tickets including the Go North East ‘Get Around’ ticket range for young people and students in full-time education;
- Two months later, the range was significantly extended to include the company’s successful ‘Route Saver’ tickets which give discounts for use on specific routes;
- As with the key smartcard, tickets purchased using the key mobile app are cheaper when compared with on-bus ticket equivalents.

The launch of mobile ticketing was extensively promoted through an integrated, multi-channel marketing campaign.--- The new mobile ticketing facility was promoted as an extension of the key mobile app made easy by the way the two apps work seamlessly together.

In the 4 months since key mobile app was launched it had been downloaded more than 11,000 times and is growing by around 2,000 downloads a month. The company is expecting mobile ticketing to account for thousands of ticket sales per month within six months, being driven by a combination of existing customers changing from on-bus cash or smartcard transactions and new customers who previously did not use the bus.

Now, at one year old, there are over 73,000 key cards in circulation and over 100,000 journeys made using a smartcard, including English National Concessions, giving Go North East one of the largest bus smartcard schemes in the country. When combined with the key smartcard schemes of its sister companies within Go-Ahead, it makes the company the largest commercial bus smartcard operator in the UK.

The key mobile app’s simple design and ease of use is proving to be very popular with both customers and staff. Drivers find the large, clear screens on a smartphone much simpler to check than the previous ‘traditional’ phone offering and the live expiry countdown instead of the traditional expiry date is also popular with staff.

Because the mobile ticket is ‘locked’ to an individual’s smartphone, coupled with the other security features of live countdowns instead of fixed dates and animation, the potential for fraudulent ticket use is much lower than conventional paper tickets, offering much improved revenue security for both Go North East and its customers.

Further information about the scheme is available at: http://www.simplygo.com/thekey-smartcard/