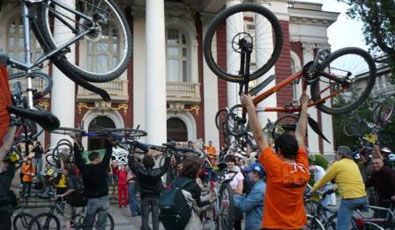 Implemented by a coalition of NGOs, the “Bike Evolution” project resulted in the development of the Sofia Bike strategy, a range of popular public events and the construction of new bike paths. These activities are helping to make cycling a way of life in Sofia.

Like other countries in Europe, Bulgaria experiences many of the problems associated with increases in personal motorized transport - traffic congestion, pollution and stress to road infrastructure. Most serious are the emergent road safety issues that result in some 200 daily car accidents in Sofia alone. Many of these accidents involve children and cyclists and are attributed to illegal parking on sidewalks and streets due to lack of adequate parking space. In addition, because cycling as a mode of transportation is so new, drivers are not used to sharing road space with (and therefore, looking out for) cyclists while many cyclists are not equipped with proper safety gear, such as helmets and lights, when they go riding. Indeed, the municipality has not catered to the needs of cyclists in the past. The situation culminated in the urgent need for an organization that could establish and organize cycling communities, lobby for cycling legislation reform and promote cycling as a viable alternative mode of transportation. That role was filled by Bike Evolution in 2006.

Bike Evolution developed with the support of the Bulgarian Partnership for Sustainable Development (BEPF) as well as the Fred Foundation, ASEED and the Dutch organization, NCDO. Although its primary activities are concentrated in Sofia, it is a national organization that actively develops partnership with other cities in Bulgaria that are working to find solutions to similar urban transport problems. In addition, a major function of Bike Evolution is capacity building, which not only keeps the municipality abreast of cycling related needs; it also serves as a support structure when resources in the municipality are more scarce. When the municipality was not able to allocate appropriate human resources to upgrade its outdated city master plan, Bike Evolution provided for a new Sofia Bike strategy, implementation plan and scheme; all expected to be complete in October 2008.

Implementation of the two-year project, working from a 14,000 EUR fund, began in 2007. The project is expected to end in 2008 with the completion of two16 km alleys and sidewalks costing about 2 million EUR. The consortium took a multifaceted approach to achieving its objectives by combining efforts with previous and on-going efforts of the Sofia Municipality and successfully establishing, financing or participating in numerous events and activities to support cycling in the city. These include Earth Day and the annual Sofia Cycling parade. Also part of the Bike Evolution project were organized bike tours around Sofia Pancharevo Dam, protests and support for European Car Free Day, European Mobility Week and the Christmas on Bike initiative. Knowledge sharing was enhanced by participating in the Cycling and Transport conference in Belgrade and Sofia.

The Bike Evolution project is a success story for many reasons. It has achieved its goal to build and maintain a biking community in Sofia as evidenced by increased attendance from a gathering of 200-300 individuals to over 1000 at Critical Mass and other public events. In addition, cycling discussion group membership has increased to 150. Bike Evolution has also been successful at gaining the support of the private sector, including a leading a mineral water bottling company. The organization now reaches a wide variety of cyclists, from young riders who use the internet as a primary tool of communication to the elderly. Further increasing the breadth of cycling enthusiasts, the activities sponsored by Bike Evolution have increased media attention to cycling events. Bike Evolution has been successful at incorporating biker’s concerns into public and private sector investment plans; ensuring that cycling remains a permanent part of Sofia’s urban transport management plan. Future Bike Evolution projects will focus on improving road safety, reducing bike theft, increasing bike alleys, better strategic planning and working more closely with the private sector.