Involving stakeholders and citizens in designing a new interchange in Zagreb. Croatia 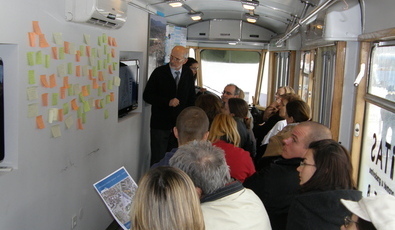 Through the CIVITAS ELAN project, the city of Zagreb came up with a design for a new multimodal interchange. A rigorous campaign promoted the project to stakeholders and the general public.

It is important to inform and engage citizens, not only while developing a SUMP, but when they are directly affected by a specific measure being implemented. The aim is to ensure that the measure is accepted and that the opportunities that come with the measure are promoted. In the case of Zagreb, this measure was the study for a new multimodal interchange for public transport, in the south of the City.

Through its involvement in the CIVITAS ELAN project, the City of Zagreb produced a conceptual design for the new Sava-North intermodal passenger terminal. Situated in the southern part of the city near the River Sava, this new terminal was designed to include rail, tram, bus, bicycle and taxi infrastructure and was envisioned as a trigger for economic growth and urban development in the area. Due to its accommodation of five different transport modes and its anticipated impact on development, the city decided to involve different local stakeholders in its traffic and design study. Various administrative bodies, public transport operators, NGOs and representatives of city districts were consulted in an early phase of the study.

Articles about the study were published in professional, daily and fortnightly newspapers. The “zagreb.hr” newspaper printed 300,000 copies and delivered them to households free of charge. TV and radio stations covered the study and a leaflet was printed and distributed.>Media coverage included six newspaper articles which encouraged readers to send remarks and suggestions by post and e-mail. The city replied to all of them. Two presentations were made to citizens; one at the CIVITAS ELAN forum and another at a retirement home.

Stakeholder meetings and presentations were held to help describe to citizens the study and help invite debate into these sessions. Participants were encouraged to interrupt the presentations at any time to ask questions. This helped create a relaxed atmosphere and participants responded well. The study’s authors received feedback, remarks and suggestions and the majority of them were incorporated into the final version of the study.

Through its awareness campaign, the city of Zagreb was able to highlight the benefits of the study to its stakeholders and citizens and therefore gain greater acceptance for this future measure (the interchange would not be constructed within the timeline of the CIVITAS ELAN project). Within the SUMP process, the communication of the plan is as critical as the plan itself, therefore a good communication strategy to inform and engage citizens is essential.