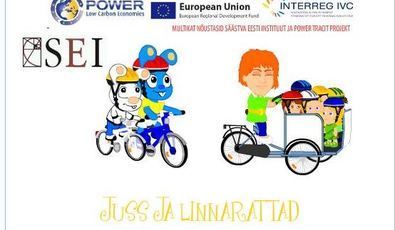 The objective of this initiative was to introduce everyday cycling and public transport in the city to kids and their parents, showing how cycling in the city can be made practical and fun for all members of the family. Due to rapid motorisation, sustainable transport modes have a bad reputation among the public. Despite the fact that most of the daily trips in Estonian cities are still made by public transport or by foot, the public and the media reflects on driving as the main mode of transport. Sustainable modes of transport, especially cycling, are not considered as a daily means of transport. Cycling is seen more as a sporting or Sunday leisure activity. The “hero” of the children's portal lastekas.ee (Jänku-Juss) Peter Bunny normally drives in a car to different activities.

The cartoons together explain how sustainable transport modes save energy, reduce emissions and make our cities more liveable. Another aim was to influence parents through kids, as in many families this portal is used often by kids younger than 5 years and they watch the cartoons together with their parents. The cartoons were further promoted and presented through additional activity - Public Cinema Program of Mobility related cartoons for kids in Cinema “Artis” Tallinn, in cooperation with Tallinn Transport department and Estonian Police from May 7th to May 25th 2011. The main partners were SEI-Tallinn (Power TraCit and EPOMM-PLUS projects), Tallinn City Government (Civitas Mimosa), Estonian Road Administration and Estonian Police.

Interactve cartoons are continuously published on the portal and on Youtube, with average unique hits between 60000 and100000 per cartoon which, for a nation of 1 million Estonian speakers, is a significant number. The cartoons are also in regular use at schools and kindergardens. 10 Public screenings were attended by 2400 cinema-goers. The success of the project is due to using mainstream channels to broadcast awareness-raising material. One-off design, storyline and publishing in "project based" portals does not receive as much publicity. There was also very good co-operation between several EU funded projects. One of the cartoons was translated into Polish by Polish partners of the Power TraCit project.