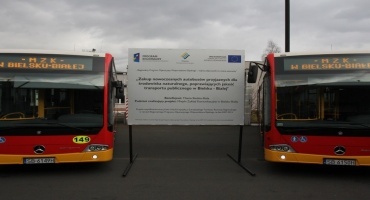 Since 2010 the Polish city of Bielsko-Biala has been implementing a project of improvement of public transport service quality. The city bus operator has exchanged 20 old vehicles for new ones, delivering modern and environmentally friendly technology.

In 2011, some of the buses in the Bielsko-Biala public transport fleet had been in service for almost 20 years. The oldest vehicles were not easily accessible for people with mobility limitations and were very harmful to the environment. The heating system was insufficient during winter. The city authorities therefore decided to undertake action to change and improve these features.

The project began in 2011 with the introduction of the first 6 new buses. At the end of 2011 the remaining 14 buses were delivered, which completed the project. The project was worth around €4.5 million (21 million PLN). 70 percent of the cost was covered by the European Fund and the rest was met by the city.

The buses have an automatic system that counts passengers via special sensors mounted at the doors.>The system can accumulate statistical data, such as on the numbers of passengers using the bus at certain times of the day, allowing the line operator to schedule planning. The system registers the location of stops as well, which gives full information about the real utilisation of the buses.

The new buses are also safer than their forerunners. CCTV cameras provide full monitoring for the driver and the picture is recorded, offering useful evidence in the case of theft, vandalism or other passengers’ complaints.

Other technical novelties have been introduced as well. The engine chamber is equipped with an automatic fire detection and extinguishing system. The drivers are very pleased with the new vehicles. For example, they particularly appreciate the automatic door opening system, which ensures that all doors open when the door release button is pressed.

The new buses are now in service on the most loaded lines. Thanks to European financial support, 20 old buses have been exchanged for modern and clean vehicles. The city itself would not be able to proceed with the project on such a large scale without such support. Both passengers and drivers are pleased with the new standard of transport. The buses are quiet, warm and give the drivers higher quality working conditions. There are currently 142 buses serving the city of Bielsko-Biala.