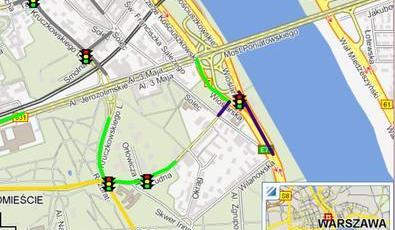 The Integrated Traffic Management System is an electronic system used by the Roads Authority in Warsaw to support mobility in the city. The system has been operating since November 2008 within the pilot area covering 37 intersections. The Siemens Consortium was contracted for the first stage of implementation.

The objectives of the Integrated Traffic Management System are the regulation and current control of traffic in the supervised area, giving priority to public transport and informing road users about traffic incidents.

The implementation of the pilot project - area I - Wislostrada, Powisle and Aleje Jerozolimskie was finalised in November 2008. The project received financing from the European Regional Development Fund in the framework of the Integrated Operational Programme for Regional Development.

In addition to light-signalling devices at intersections, the system consists of a Traffic Management Centre located at the Roads Authority premises and also an optical fibre communication system connecting all traffic lights controls, as well as variable-message signs and 22 cameras at 20 intersections.  Additionally there are cameras and a control system in the tunnel on Wislostrada and subsystems providing information about traffic, environment, and road hazards (variable-message signs and website zszr.zdm.waw.pl).

Implementation of specific subsystems is foreseen for the years to come but development and effective traffic control will be prioritised.

The system will also include the following subsystems:
• information on the traffic situation using variable-message signs
• information about the environmental conditions using weather stations and variable-message signs
• monitoring and control of traffic in tunnels
• prioritisation of public transport (trams and buses) and special vehicles (e.g. ambulances, police vehicles, fire trucks).