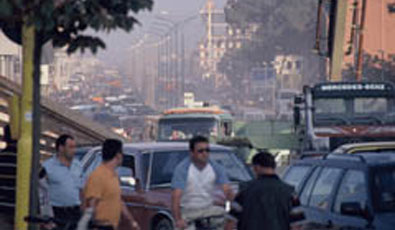 Since the early 1990's, road traffic has increased exponentially in Tirana, the capital and largest city in Albania. Today the increase in road traffic is not only taking a heavy toll on road infrastructure, increased pollution levels are threatening the health of people who live and work in the city. With funding from the EU and other stakeholders, the not-for profit organization ECAT Tirana was instrumental in outlining the short and long term goals and activities necessary to better manage city traffic and improve air quality.

According to 2007 traffic data, average traffic counts have increased 13.1% over the previous year in Tirana and have been climbing at about that same rate for the past 7 years. Further, according to ECAT, road traffic is expected to double by 2014 and triple by 2021 if trends continue. The combined increase in road traffic and lack of significant improvement in road infrastructure has caused chronic congestion on all principle roads and dangerously high levels of pollution. The EU PM10 air quality standard, used to describe particulate matter of 10 micrometers or less, is 40µg/m3. Fine particles of this scale tend to float in the air and can cause asthma, lung cancer, cardiovascular diseases or even premature death. In Tirana, the PM10 level is between 124 - 127 µg/m3, well above WHO and EU guidelines. To help address this problem, the Sustainable Traffic Development in Tirana, Albania (SUSTRAFFTIA) project developed tools to manage traffic more effectively, reduce pollution and to raise awareness about the health risks associated with traffic related pollution.

The project was implemented in four concurrent phases:

-Integrated Strategy for Sustainable Development - focused on short and long term strategies for integrating urban planning and demand management, raising emission standards, introducing clean fuels and increasing maintenance standards. Considering expected traffic flows and social costs due to air pollution, this phase helped determine that a public transport strategy, as opposed to a road strategy approach, would yield a better return on investment.>Bus Rapid Transit was thus envisaged as the backbone of the public transit strategy.
-Monitoring Traffic Pollution - evaluated where synergies between existing projects on environmental/traffic legislation and air pollution could converge to establish a reliable air quality monitoring system.
-Targeted Capacity Building - experts in the transport sector were targeted for seminars, on-the-job training in Tirana and study tours in Germany and France to learn new technologies.
-Public Awareness Campaign - such activities as primary school drawing competitions and car-free days were organized

Originally slated to finish in February 2008, SUSTRAFFTIA will conclude in 2009. The project has already produced an Inspection, Maintenance and Roadworthiness of Vehicle handbook, which suggests that government should be responsible for setting car maintenance and technical standards, which should then be distributed to licensed contractors. A draft protocol for modeling the spatial distribution of NO2 in Tirana was developed with plans to conduct an NO2 sampling survey based on this methodology underway. The SUSTRAFFTIA project was a factor in the emergence of new traffic patterns in Tirana. Air pollution data coupled with traffic counts will provide an estimate of the relative contribution of road transport to emissions of key pollutants. The project will enhance the legislative framework related to traffic and build capacities related to traffic and transport management.