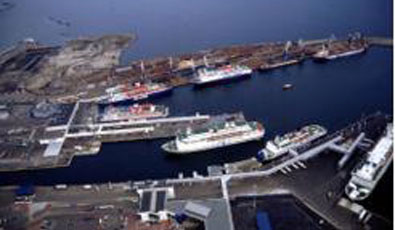 Port of Tallinn is one of the busiest passenger ports in the Baltic region. It provides a wide range of facilities for passengers such as easy access by public transport, information centres, online timetable information, luggage storing facilities, shops, pharmacies, …

Port of Tallinn is one of the biggest and busiest passenger ports in the Baltic region and when considering the international regular passenger traffic only, it is among the traffic leaders in the whole world. Some seven million passengers pass Port of Tallinn’s passenger terminals in a year with a lion’s share served in the Old City Harbour. Old City Harbour is situated right at the gate of the medieval old town. With its four modern passenger terminals the harbour is a berthing place for passenger ferries and cruise ships, and during summer season also for high-speed vessels. In order to fit effectively into the competitive environment, Port of Tallinn underwent a complete restructuring process in the mid 1990s by developing from a service port into a port of landlord type. In 1999, the last cargo handling operations were finally given into the hands of private companies. Today, Port of Tallinn operates as a landlord type of port with no cargo handling operations of its own. Port of Tallinn consists of five constituent harbours: Muuga Harbour, Old City Harbour, Paljassaare Harbour, Paldiski South Harbour, Saaremaa Harbour. All harbours are navigable all the year round and easily approachable with depths of up to 18 meters enabling them to receive all vessels able to pass the Danish Straits.

The majority of passengers arrive and depart from the Old City Harbour. The Old City Harbour consists of four terminals (A, B, C and D), which all are equipped with gangways from the terminal to the ships and are fully weather protection. Terminal A consists of two levels. The building is entered at lower level. In front of the entrance the taxi stand is located. At this at-grade level some facilities for daily use and consumption, bathrooms and the check-in counters for Vikingline and Eckeröline are situated. The passageways to the ships are at upper level which can be accessed by stairs, escalators or elevators. Entering this level the security check and boarding card control are processed. Further on the ships can be entered barrier free and weather protected. Terminal B is entered at-grade level. From there stairs and a lift lead to the upper level where the boarding procedures are processed. Passing the passport control the passageways to the ships, which are barrier free and fully weather protected can be reached. Terminal C is a one-level terminal and designed to process departing and arriving passengers simultaneously. Next to the main entrance a bicycle terminal is situated. The terminal building is among other things equipped with a business lounge and check in desks for Nordic Jet Line.>The passageways to the ships are at-grade level, barrier free and weather protected. Terminal D consists of three levels. The passageways to the ships are accessible from the upper floor. On this level the boarding card control and security check are positioned. Shops, bars, terminal information, etc. are provided. All levels can be reached via stairs, escalators and elevators. All terminals are arranged compactly and are comparable to an airport terminal.It is easy to reach the Old Harbour by public transport. Bus stops are situated close to the terminals. Some hundred meters walking distance from the terminals the local tramway (tram lines 1 and 2) is operating. Buses, trolleys and trams operate regularly from 6 a.m. to 11 p.m. Tickets can be purchased at newsstands in the terminal. Those holding valid ISIC/ITIC cards can apply for a ticket at a reduced price. Tallinn Card holders may use unlimited public transportation free of charge. Tallinn Card can be purchased from the tourist information office in passenger terminal A. Bus no. 2 runs between the harbour and airport via city centre. All terminals can be reached easily via private car or taxi. Two paid guarded parking lots on harbour territory are located by terminal C and terminal D for short term as well as for long term parking. Taxi stands are located next to the passenger terminal buildings. Velotaxes (bicycle taxis) provide a fun and environment-friendly way of getting around the city centre and harbour area. They operate from March to October.The barrier-free terminals are equipped with harbour and tourist information centres, pharmacies, currency exchange offices, cash machines, luggage rooms, bars and shops. Three hotels are located at the harbour area. In Old City Harbour terminals A, C and D it is possible to store hand luggage. Luggage boxes require 1euro or 50 euro cent coins. The charge for a larger box is 2 euros/24h, for a smaller box 1 euro/24h. All port facilities have security plans approved by the national maritime authority and compliant with ISPS requirements.All information is provided in native and English language. Online timetables are offered as well as information desks both for harbour and tourist information. Schedules are also available via internet (www.portoftallinn.com).Based on the results of the customer satisfaction and competitive position surveys it can be affirmed that the implemented process and client-centred management model has ensured better quality of customer service and increased the Company's competitiveness. During the last years Port of Tallinn has put a lot of effort into planning (development plan), feasibility studies, analysing the needs of the clients. Port of Tallinn is determined to pursue the highest quality and environmental standards to ensure the well-being of all its stakeholders
Topic:
Archive
Country:
Estonia
City:
Tallinn
Contact:
Port of Tallinn
Author:
KITE project
Keywords: