Integrated Bicycle System - the City of Sandnes in Norway 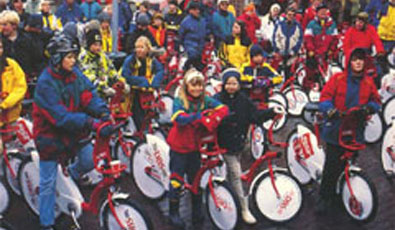 Sandnes has about 56.000 inhabitants and lies in Norway. The city lies beneath a fjord and has a beautiful landscape. Next to the 100 km of coastline there is a fantastic recreation redion. All these things make Sandnes to a perfect area for all kinds of outdoor activities.Nevertheless the population of the city is constantly growing and as Sandnes is the communication center of the region the volume of traffic increases constantly.

The municipality of Sandnes has already joined the Healthy Cities Project in 1991. Most of the actions directed to an improved health and environmental system were continued since then. The main aims of the events and activities were to reduce the total amount of traffic. The projects aimed at motivating people to cycle, to walk, to use public transport and to reduce private car use. The main objectives should be reached with the help of promotional campaigns and through special land use plans.The ministry of Environment for Norway also planned to launch a 4-year pilot bicycle project. Sandnes was chosen to be one of the two towns who participated in the project aiming at creating a more cycling friendly town, increasing the number of cycling people and promoting cycling as a daily mode of transport.

In the time between 1991 and 2002 the municipality spent 12,5 million Euros on the improvement of the cycling infrastructure and about 1,25 million Euros for the organization of motivational campaigns. With the money for the infrastructure there were for example new bicycle parking lots build.>A cycle map for Sandnes and the region was drawn, recreation routes were planned and implemented, a free city bike system was carried through. All the projects had an environmental projection and a health background. The health component worked in the field of more physical activity, less car accidents and better, less polluted air.The public bike system which was introduced in June 1996 was another part of the bicycle project. The citizens had the possibility to use public bikes by paying only a very small amount of money. Three ways of renting the bikes were tested for the system. One in which you had to use a coin to open a lock, one where the subscriber had a special key and another which was a rental system ( the user paid a rental cost or deposit). In 2001 225 bikes were offered by the city and 30 new bicycle stands were opened containing 350 parking lots. The customer of the system will be local working or school people, tourists and inhabitants using the bike for shopping reasons.

As a result of the whole campaign which lasted over 10 years the cycling traffic of the city increased by about 10% and the use of helmets rose from 10% to 46%. In Wintertime cycling traffic makes up 5% and in Summertime 12% of the whole volume of traffic. During the project 70 km of bicycle lanes and 400 cycle parkings were built. For the public bike system Sandnes developed a special electronic lock system and there are now 225 city bikes spread over 40 racks.As a result of the campaign, the City of Sandnes now offers the best cycling environment in Norway.
Topic:
Urban mobility planning
Mobility management
Walking and cycling
Archive
Country:
Norway
City:
Sandnes
Contact:
Marco Zanussi
Author:
Teresa Magens
Keywords: