An integrated approach to implementing Congestion Charging in London. England 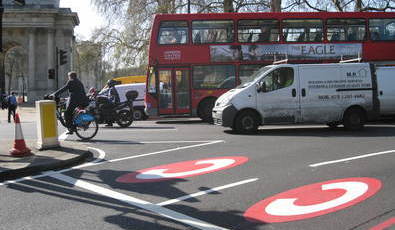 Without the integration of other transport policies, the impact from London’s congestion charge scheme would have been insignificant. This integrated approach to Sustainable Urban Mobility Planning ensured that the London Congestion Charging scheme was a success.

When creating a Sustainable Urban Mobility Plan, it is essential that the schemes implemented in to the plan are integrated with each other to ensure that the true benefit of the plan can be recognised. A good example to illustrate the need for an integrated approach is a congestion charging scheme – such as the one implemented in London.

The London congestion charge is a fee charged for certain categories of motor vehicle to travel at certain times within the Congestion Charge Zone (CCZ), a traffic area in London. The charge aims to reduce congestion, and raise investment funds for London's transport system. The zone was introduced in central London on 17 February 2003, and remains one of the largest in the world. Several cities around the world have referenced London's congestion charge when considering their own schemes due to its initial success. It is believed that ccongestion charging is a powerful measure that can be effectively implemented to reduce road traffic as it modifies the composition and volume of traffic, and hence affects pollutant emissions as well as noise levels.

But if implemented as a stand-alone measure, the expected magnitude of reduction effects would be rather small. If combined with urban planning and design, public transport improvement and promotion, parking management, low emission zones and exemptions for “clean” vehicles, these measures tend to mutually reinforce, catalyse and complement the effects on pollutant, CO2 and noise emissions.

At the same time, negative effects such as congestion in adjacent areas or social equality of access and mobility need to be addressed by compensatory measures. The exact definition of the zone perimeter plays a significant role here.

This example relates specifically to the Activity 2.2, Strive for policy coordination and an integrated planning approach, in the Sustainable Urban Mobility Plans Guidelines document, available here