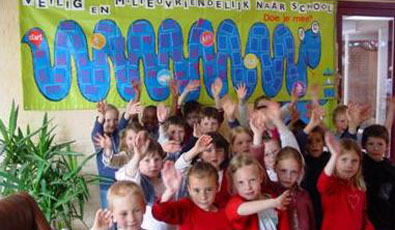 Two out of three parents bring their children to school with their car despite the fact that most children live closeby. Children enjoy walking, cycling or taking public transport to school. This gives them a chance to talk to friends. Unfortunately many parents find the routes to school often too dangerous for walking or cycling they find it more convenient to ‘quickly’ drive the children with their car. The well-known consequence is that an increasing number of children are driven to school by car every day.

Since 2000-2001, Mobiel 21 has organised the campaign 'Safe and Environment Friendly to School' with the support of private partners. The campaign covers

Through the game, schools stimulate children and their parents in a playful way to more walking and cycling.

Walking, stepping, cycling, taking the bus or using carpool are healthy and sustainable alternatives for parking chaos and turned on engines at the school gate. As a direct outcome there will be less car traffic at the school gate and the discussion on traffic safety is opened. Often the traffic snake game is just a first step to a bigger, more organised transport and mobility project for the whole school.

Each time a pupil comes to school with a sustainable mode of transport (walking, cycling, using the bus or carpool), during the campaign week, they receive a little red dot. Pupils that use a bike and who are using their bicycle helmets receive 2 dots as this behaviour increases their safety.

Up to 29 % more sustainable trips! During the year 2004-2005, a total number of approximately 76.800 pupils, 5.500 teachers, 3.900 classes and 55.500 parents have engaged themselves to let the car stay at home for at least one week. For the regions of Flanders this means that two primary schools out of ten participated in the campaign.

A success factor lies within combining the game with content based mobility projects fitting the local needs. The proposal was successfull and the EU funded CONNECT project (2007-2010), which focused on Sustainable Mobility Campaigns for Young People has now finished. The project successfully increased the use of sustainable transport modes and reduced CO2 over the three years of the project. CONNECT reached almost 85,000 pupils and over 5,000 teachers from more than 350 schools in nine countries. Collectively they saved over 1,000,000 car kilometres. CONNECT showed that great results can be achieved through co-operation and networking. The website and more information can be found at http://www.schoolway.net.