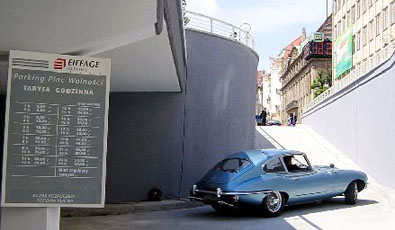 Faced with increasing numbers of cars entering and parking in the city centre, and the lack of success with traditional parking measures to combat this problem, Poznan City Council introduced an innovative underground car parking scheme.

Poznan is one of the largest cities in Poland with over 560,000 inhabitants. It is also one of the oldest cities, making it an important historical centre and a vibrant centre of trade, economy and education. Due to the large number of historic monuments, museums and galleries Poznan’s Old Town district is very popular destination for tourists.

This causes major problems with traffic and parking, the level of on-street parking is too small and very often parked cars are blocking sidewalks and other places not designed for parking. Related to these issues are high incidence of car thefts and vandalism at night-time. In an initial attempt to solve these issues, Zarzad Drog Miejskich (Board of The City Roads), placed restriction on parking spaces in the city centre, set up parking zones and increased the number of police patrols during the night. However, despite these initiatives, the problems outlined above (although, reduced) still remained and additional more efficient solutions were needed.

Poznan City Council proposed building an underground parking under one of the oldest square in Poznan, Wolnosci Square. The square is situated in the middle of the oldest part of town, with easy access to museums, galleries and shops. It is also surrounded by numbers of bus and tram stops. The idea was proposed at the end of 2004 and after 19 months (May 2006), the underground parking was open and ready to use. It has 3-levels with nearly 550 parking spaces. The lowest, 3rd level is 12m under the surface.

Following its opening, the City Council have also placed parking restrictions around the immediate area. The new car park is open 24 hours a day and has CCTV installed to enhance security. Even the parking fee is lower in better secured parking. The cost of parking is 2 PLN (0.55 Euro) per hour, compared to on-street parking costs of 3 PLN (0.8 Euro) per hour.

Since opening, the number of parking tickets issues for illegal parking have reduced by approximately 15-20%, as well as the number of robberies and vandalism reported involving parked cars. The only problem with the initiative is that cars powered with LPG, which due to their cost are very popular in Poland can not (as yet) use the underground parking scheme.

Further information about this and other parking initatives is available at the City of Poznan website (in Polish). City of Poznan