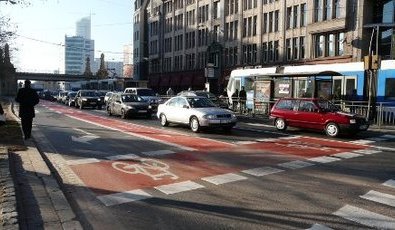 In Spring 2012, the cycling development department at the Wroclaw City Council published brochures for cyclists traveling in Wroclaw. The publications give a detailed explanation of the latest solutions implemented in the city to make the streets of Wroclaw more cycle-friendly.

The need for information on innovative cycling solutions occured, when new modern elements of bicycle infrastructure were constructed. The city council recognised that the implementation could not be limited to the construction itself. To make the innovative solutions work, proper information for the public had to be provided as well.

In Wroclaw and other Polish cities there is a noticeable trend towards cycling on the pedestrian pavements. This option seems to be safer for the cyclists, though it is illegal. Bike lanes are now provided on the roads to encourage the cyclists not to use the sidewalks (mainly dedicated to walking traffic).

Two versions of the information brochures were produced: paper and electronic. An electronic edition is available on the website of Wroclaw City Council. Paper leaflets were distributed at various events, including an information campaign for the cyclists, which was carried out in early April 2012.>The leaflets were also added to Warsaw’s urban transport conference materials. Some brochures were handed to the Wroclaw Cycle Initiative, a non-profit cyclists’ advocacy group.

The brochure is part of the programme to encourage cycling, funded from the city promotion budget. Execution of the project was carried out by a graphics company. Preparation and printing of the brochures took a total of 3 months and 4000 copies of the campaign leaflets were printed. The entire cost was less than 10,000 PLN (about 2,400 €).

This project is the first of its kind initiated by the city. More brochure editions are expected soon. The first series of the leaflets was published in Polish only. Other language versions are expected as the project develops.

The aim of the publication was to encourage citizens to cycle on the streets on dedicated bike lanes instead of on the footpaths and make use of newly installed traffic management measures such as an inductive loop detection system on one of the main intersections in the city. Research shows that there is a growing number of cyclists using the roadways. The brochure publication remains an effective support in achieving the target.