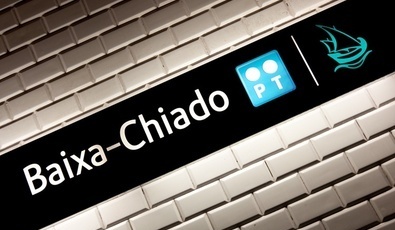 Selling naming rights to businesses is known to have been effectively applied in football stadiums, sports leagues or TV shows. Lisbon’s metro operator recognised the potential to adapt the concept to metro stations which experience a massive daily exposure to a large and varied public and has renamed its first station.

Facing the increasing need to capture additional revenue beyond customer fares, the Lisbon Metro marketing department developed the idea of selling the naming rights of subway stations. The Lisbon Metro Company offers to link some of the city’s most iconic subway stations to business brands and to associate their name with these largely populated places. The naming rights project at the Lisbon Metro aims simultaneously to stimulate and revitalise metro stations and to capture additional revenue.

The partner of the project became the advertising agency Publimetro/MOP who canvas potential interested brands, offer client management and charge an advertising fee. The Lisbon Metro Company is responsible for providing a station that fulfils the communication needs presented by potential investors and to ensure maintenance of the space.

The first brand to invest was Portugal Telekom (PT), which acquired the naming rights of Lisbon’s Baixa-Chiado Station in 2011.  Located in the heart of Lisbon, the station is found where two major lines intersect and, hence, is frequented by about 13 million people each year. For a period of 5 years, Portugal Telekom got the exclusive right of promoting their corporate image through brand name association in written and figurative illustrations within the chosen station. This also includes all relevant signage and material such as network maps, website, mobile apps, etc.>In addition, Portugal Telekom is entitled to carry out brand activation initiatives at the metro station including organisation of events and customised decoration of the station.

The station has been renamed “Baixa-Chiado PT Blue Station". The station’s platforms are now equipped with an interactive blue light system (the corporate colour of the Portuguese telecom) that signals arrival and depature of metro trains. The walls and ceilings are animated with news and information about this historical downtown neighbourhood.  In addition, the rebranded station offers a cultural and recreational agenda, with live events occurring daily. PT also provides free Wi-Fi access at this station.

The revenue is shared between the Lisbon Metro Company (30% after commissions and agencies reimbursement) and Publimetro/MOP (70%) while all investment costs involved in implementation are covered by Publimetro/MOP. This includes the actual physical alterations to the station, maintenance, electricity costs and signage adaptation.

Selling the naming rights of metro stations contributed to additional revenue for Lisbon’s Metro company. This business model offers the opportunity for Metro to reduce its costs as the main investment efforts are made by Publimetro/MOP. This translates into an excellent return on investment despite the fact that only 30% of turnover is allocated to Lisbon’s metro. In addition to the revenue generation, the project also provides metro users with a more attractive space including cultural, educational and entertainment and new technology services, such as free Wi-Fi access without additional cost.