Increasing bicycle use in Burgos 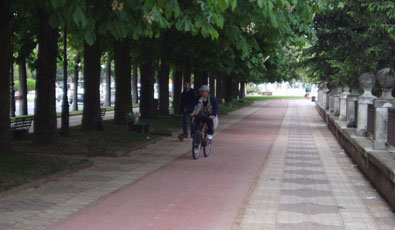 The objective of this measure is to link up sections of the existing bike lanes to one and to foster bicycle use as an alternative means of transport. The bicycle was frequently used for sport but not as a means of daily transport. One of the most important challenges was therefore to change perceptions of the bicycle and the way it was used.

For many years there has been a demand for bike lanes to allow travel throughout the city in safe and comfortable conditions. Various sections have been put in place as planned by new urban development plans and to connect the city to the green belt at its edge. Nevertheless, the current bike-lane network is not interconnected and not all are equipped with safety features to guarantee the pedestrian and cyclists’ safety since they often occupy part of the sidewalks. Presently, a 23 km bike lane extension project is being developed. For a medium-sized city like Burgos, this implies an important step forward towards an integrated bicycle network.

The innovation element of this measure will consist in analyzing the existing bike lanes and defining the new sections.

Important activities are in the field of the safety, parking, and bike lanes that are adapted to stakeholder needs and conditions in Burgos. Innovative services will be set up around the bike-lane scheme.

The aim is to extend the existing network of bike-lanes, paying particular attention to three fundamental aspects:

The new sections to be introduced will be equipped with the latest safety mechanisms (traffic lights, appropriate signs, road markings) and will provide information panels on bicycle lane maps and parking facilities for bicycles, including underground facilities in commercial and administrative centres.

The demonstration activities are divided in the following steps:

The working steps described in the following have been finalised.

Administrative processes for the purchase of bike racks and management of the public invitation to tender:
Procedures for the adjudication of the tender for bike racks.
Meetings with the local association promoting bicycle use:
Various meetings with the local association promoting bicycle use with a view to defining different proposals for action.
Study on bicycle use:
The criteria have been defined for the analysis of bicycle use in the city and to arrive at reliable data on that type of mobility. The administrative procedures have been completed and the study is underway.
Poster competition for bicycle use:
A poster competition has been organised to place posters (3x3 metres) in various parts of the city. The competition specifies that the spirit as well as the theme of CIVITAS-CARAVEL must be respected: Promotion of bicycle use. The annual bicycle festival in Burgos (Burgos En Movimiento - BEM) will be complemented by events to encourage bike use and bike-related performances.