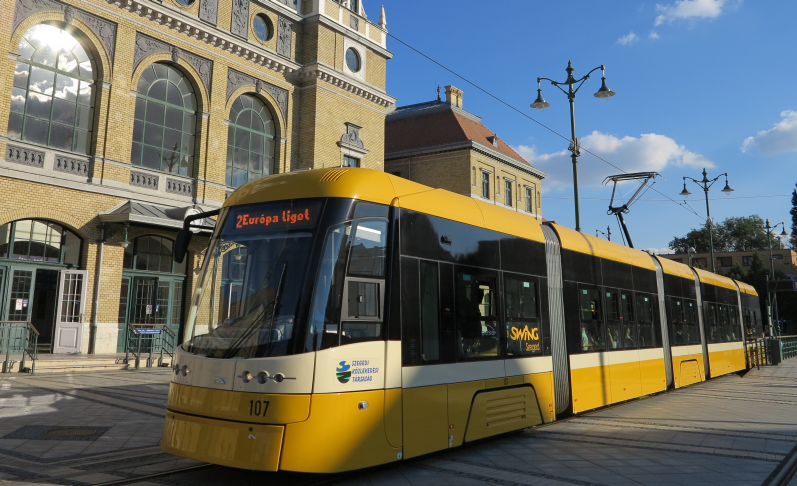 The city of Szeged has 170 000 people and is located in the south-east of Hungary along the river Tisza. The inner city has two bridges and a highway connection and, as of 2010, a bypass for international traffic. The city faced many transport-related problems. Residential areas were in need of higher-capacity routes; the inner-city needed new track constructions and traffic bottlenecks across the river Tisza needed to be eased.

To tackle these, Szeged decided to modernise its public transport system and in March 2007 the municipality accepted the Strategic Transport Development Concept which set out the city’s transport policy. The plan acts as guidance and will provide input for a soon-to-be-developed Sustainable Urban Mobility Plan. In 2008 the Hungarian government approved an ambitious € 100m tram and trolley-bus project to help meet the objectives of the Concept; 13 per cent was funded by the municipality and the Szeged Transport Company, while the remainder was financed by the EU’s Cohesion Fund.

The preparations for the project started in 2006 with a survey to identify traffic problems in each part of the city. Szeged found that it would have to make many improvements, so in March 2007 the municipality accepted the Strategic Transport Development Concept and put Szeged Pólus, a Hungarian non-profit organisation, in charge of managing the planning and construction of the measures resulting from the long-term goals contained in the Concept.

One of the aims was to maintain and strengthen the transport serving the city’s 1970s housing estates; another was to develop a ‘green inner-city’ where the centre of the Szeged is served predominantly by electric public transport and on the long term traffic will be banned from the city centre.

Consequently, the plans included extending the tram and trolleybuses to run alongside the estates, improving existing services, and electrifying public transport in the city centre. Other initiatives included developing three major transport hubs; redeveloping the train station area; increasing the road capacity at the exit/entrance to the national route 5 from Budapest with a new traffic-light regulated roundabout; and giving priority to public transport at the bottleneck section of the bridge between Szeged and Újszeged.

The major constructions finished in 2011 and the last vehicles (trams and trolleybuses) were delivered in 2014. The whole project is expected to be completed in 2015.

Thanks to the project a new 4.8km tram track was constructed and a 18.3km tram track was redeveloped. The trolleybus network was expanded by 3.7 km, while a major road network and urban environment was developed alongside the reconstructed tram and trolleybus lines, including improved pedestrian zones, bus stops, road junctions, roundabouts, bike lanes and green areas.

Nine low-floor trams and 13 trolleybuses were introduced into Szeged’s fleet, and 72 new platforms were built to provide level access for passengers to low-floor trams. A new passenger information and traffic management system was installed, including electronic displays at 100 stops, and priority is now given to the vehicles at traffic lights at 28 junctions. Furthermore, eight Bike-and-ride stations were built next tram and trolleybus stops.

Long-term servicing concerns were also addressed as part of the project. Newly reconstructed tram and trolleybus depots will improve future maintenance, and 10 electric substations were either newly built or reconstructed, including the renewal of the feeder-cable system.

Thanks to these improvements, the new electric transport accounts for 55 per cent of Szeged’s total public transport fleet - which, in total, makes up 40 per cent of the city's modal share.

In 2007 three provincial cities began similar public transport projects in Hungary, while some smaller-scale development projects based on co-funding with EU grants also already started in 2004. Even though these projects were not as well developed as in Szeged, some expertise was already available for the purchasing of the new vehicles and the implementing of the construction projects under the EU funding framework. This kept the costs controlled during the planning stage.

A key to the success of the project was separating the day-to-day operations of the municipality and the public transport company and delegating the project management to Szeged Pólus.

Project co-ordinator Dr. Zoltán Ádám Németh says: ‘This helped maintain the focus on long-term goals and provide more flexibility and an increased power to respond during the implementation phase. Szeged Pólus was also important for managing the delays and warranty issues during some parts of the project. Some were smaller, such as corrosion issues, or problems with road surfaces, while others were bigger - for example problems with traffic lights and new vehicles. Szeged Pólus focused on finding solutions for these challenges.’