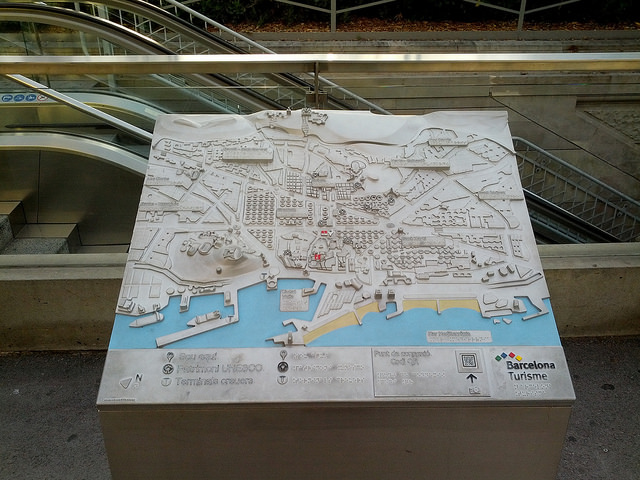 Barcelona’s transport operator, Transports metropolitans de Barcelona (TMB) has always been sensitive to the needs of travellers with reduced mobility, and is a frontrunner in eliminating barriers to transport and improving accessibility. It has installed a number of technological and infrastructural improvements over the last decade to help visually impaired passengers navigate its transport network. Thanks to its excellent work, the TMB won an award in 2012 for the most innovative and sustainable initiative in Spain.

TMB is Catalonia’s main public transport operator, responsible for about 560 million journeys a year in the region. TMB, co-operating with stakeholders and other companies, pays great attention to promote accessibility to public transport to all travellers. In Spain 9 per cent of the population (3.5 million) is affected by some kind of disability, of which 10 per cent is a visual impairment. In this framework, TMB developed in 2010 the Universal Accessibility Master Plan [see below to download], which is meant to be a roadmap for accessibility corporate policies, highlighting steps taken and future perspective. The plan wants to be a point of reference for advancing efficiently and effectively towards universal accessibility.

Barcelona is also frontrunner in social and technological innovation. In 2014 it was recognised as an iCapital by the European Commission for ‘introducing the use of new technologies to bring the city closer to citizens'.

To help visually impaired passenger navigate the public transport network, TMB implemented a number of technological and infrastructural initiatives with the help of ONCE, Spain's national organisation for the blind.  In 2006 TMB installed ticket machines with a voice navigation system in all metro stations. This technology verbalised all of the different ticketing options that are available to customers, who could select their product using a touch screen that included help of a Braille signage system. ONCE supervised and approved the final version of the project, applying improvements to the initial proposal.

The machines are located along special walkways and are easily identifiable through a sound system activated by remote control carried by the user. They also have a duplicate title system for people with cognitive disabilities and  are built in such a way that allows people in wheelchairs to use them with ease. Walkways with different textures on the ground were also created and approved by ONCE, enabling people with visual disabilities to walk independently.

TMB also published, in collaboration with ONCE, 500 copies of a guide to the metro in Braille, providing operational information of the metro network. The guide complements the a Braille/tactile map metro network map, which allows blind and visually impaired to orientate themselves while in the metro network according to a map of the city. A Braille guide to the legend of this map is also available, listing all the codes and numbering used in the map.

Funding for these actions is charged to the TMB investment budget.

According to Fundacion Corresponsables about 7 700 visually impaired people benefit from TMB’s work in improving metro accessibility. Currently, the entire bus fleet is accessible, as is 88 per cent of the metro network (up from 80 per cent in 2010). TMB has also received positive feedback from the users and organization representing people with disabilities and several awards for its focus on universal accessibility issue.

TMB participated in the Premio Corresponsables, organised by the Fundacion Corresponsables, in the Public Companies and Administrations category. In 2012 TMB was awarded for its corporate policy in general and for the activities realised in co-operation with ONCE.

Concerning results, it should be underlined that the 'design for all' approach should be seen as an opportunity for the whole community: not only people with permanent disabilities benefit from it, but also, for instance, elderly people, parents with pushchairs for infants, people with temporary mobility problem, for example, because of an accident.

One of the factors of success was the collaboration between TMB and transport operators, governments, and organisations representing people with disabilities (ONCE, CRID – Consortium of Resources for Integration of Diversity). In addition, TMB participated in different forums of discussion at local, regional and national levels. This supported the technical development of the projects in communicating with the target users and to achieve a better understanding of the actual needs of people with disabilities.

The legal framework made good co-operation possible as  the concept of universal accessibility is present both in local and regional legislation. In fact, since 1992, when the city hosted the Olympic and Paralympics games – which were held in the same Olympic village- the importance of an integrated approach to urban mobility became a central point of Barcelona’s accessible agenda.

However, a big challenge was the finances. Raul Casas from TMB’s social corporate responsibility unit said: ‘The situation of budgetary adjustments in which we have been in recent years affected investments in infrastructure. It has been necessary to establish priorities, which have not stopped being universal accessibility issues, but have complicated the speed of implementation.’

Image copyright: Textured city map for the blind (image on Flickr) by "Eric Fischer", licensed under CC BY 2.0