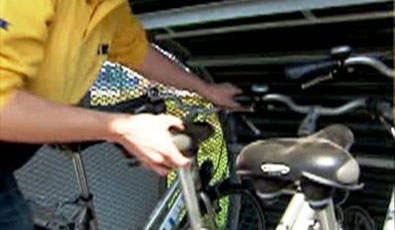 Brussels public transport company MIVB and cyclist organization ProVelo started a new service to stimulate the employees of Ikea Anderlecht to go to work using the combination of metro and bicycle. In the nearest metro station, two boxes are installed. The boxes contain 8 bikes, reserved for the Ikea staff.

MIVB is already trying to promote intermodality for a couple of years. They are especially interested in projects to stimulate the complementary use of public transport and bicycles. To achieve this they applied a number of other measures as well. For instance, in Brussels one can take it’s bike along on metro and trams for free, and most of the metro stations are equipped with adjusted infrastructure to improve their accessibility by bike.As for Ikea, they want to provide the 100 employees that come to work by public transport on daily basis with an easier means to cross the distance from the metro station to the store. Before taking big scale measures, they wanted to test the possibilities and contacted MIVB and ProVelo for the matter.

The initiators of the project installed to bicycle boxes in a metro station located about 600 meters from the Ikea store. MIVB chose the bicycle boxes and installed them. Each of the boxes has a different look and can contain 4 bicycles provided by ProVelo, and rented by Ikea.>8 staff members of Ikea have a key of the boxes and can do the distance to the store by bicycle. MIVB takes care of the maintenance and surveillance of the boxes as well.This is an important task since research pointed out that the lack of guarded cycle sheds is one of the main reasons why people don’t use their bike in combination with public transport.

To be able to judge the experiment correctly, the Ikea staff will fill in a so called “road book” on a daily basis for the duration of 1 year. In this road book they will write down their suggestions about bike use as well as the possible motives to not make use of the offered possibility.After the testing period of one year, the road books will be analysed by ProVelo and results will be announced. Ikea already stated that they are looking into the possibility to provide the service for their customers as well.