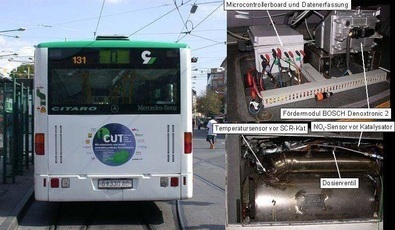 In the ICUT (Innovative Clean Urban Transport) project, funded by the Austrian BMVIT and FFG, various clean bus technologies were analysed, tested and developed. A SCR (Selective Catalytic Reduction) retrofit system was developed to reduce NOx from the engine. The system was installed in several city buses in Graz and tested in real world operation on the chassis dynamometer.

Fast mobility is the key to a functional and growing economy. However, growth is usually accompanied by congestion and harmful PM10 and NOx emissions. Public transport should lead by example in reducing such air pollutants. For buses, load factor is one of the crucial determinants of energy efficiency and sustainable handling. Buses often have lower exhaust and noise emissions than trucks and tractors. More stringent emission laws for commercial vehicles and stricter emission limits in cities have led to a higher variety of technologies with reduced emissions for trucks and buses. Examples are:

Generally, emission-lowering technologies result in an increase in costs. The approval cycles focus only on the particular operation pattern of heavy duty engines (HDE). From EURO I to EURO V, test cycles changed to ESC&ETC. A disadvantage of the ESC and the ETC tests are that driving conditions, as they typically occur in city buses with automatic gear boxes, are not covered very well.

As part of the A3 project ICUT, clean bus technologies were researched, measured and developed from 2007. A retrofit SCR system was developed, which uses a Bosch AdBlue injection system, a CERAM catalyst, a canning from RTA, one NOx Sensor, a mass flow sensor, temperature sensors and a micro controller board. Customer surveys within the project investigated people's expectations for clean bus technologies. It was concluded from this survey that people regard public bus systems as an option for environmentally friendly city transport, although most of the buses in Graz are old EURO III diesel buses without efficient exhaust gas after treatment. It was shown that only diesel particle filters (DPF) are commonly known. However, only 25% of people surveyed had ever heard about DeNOx catalysts.

At TU Graz within the ICUT project, 10 city buses with EURO IV, EURO V and EEV type approval were measured on the chassis dynamometer in the Braunschweig cycle and in the HBEFA 9040 cycle.>Additionally, data on more than 100 heavy duty vehicles (HDV and HDE) were used to simulate the emission levels of city buses from EURO I to EURO III. A clear trend towards lower emission levels of PM, HC and CO was shown. The limit values for exhaust gases from heavy duty vehicles were reduced for Euro V for NOx by 60% and for PM by 80% compared to EURO III legislation. For EURO VI, the emission limits for both PM and NOx were reduced by approximately 70% - 80% respectively, compared to EURO V.

In contrast to DPF, the efficiency of SCR systems in NOx reduction depends on the exhaust gas temperature; efficiency reaches its maximum at 300°C. SCR activity at low temperatures can be improved, for example, by means of hydrolysis catalysts. These measures add costs to the SCR systems and thus are not generally used. To regenerate the soot trapped in the DPF, exhaust gas temperatures of more than 280°C are typically necessary if NO2 is used to oxidise the soot and more than 500°C is necessary to oxidise the carbon with oxygen. However, it leads to higher fuel consumption, can harm the engine and overloading with soot can cause damage to the filter.

An SCR system as previously mentioned was developed as well as a closed loop control algorithm using two NOx sensors. The system was tested on the engine test bed and retrofitted in a EURO II city line bus in Graz. The SCR system was in favourable operating conditions during the entire test. As a result, the AdBlue dosing was reduced by the control algorithm in many phases and the SCR conversion efficiency dropped by 50% compared to the ETC results. Also, in low load conditions, SCR efficiency can be worse due to low exhaust.

The type approval cycle for EURO III to EURO V HD engines focuses on rather high engine load and high exhaust gas temperature levels and does not represent real world bus operating conditions very well. As a result, the efficiency of SCR systems can be much lower in real world city bus cycles than measured in the ETC cycle on the engine test bed. Measures to increase SCR efficiency at low exhaust gas temperatures add costs and are not needed in today’s type approval. Thus, several systems are not optimised for typical bus operating conditions. The EURO VI legislation is expected to improve this situation greatly and should lead to low emission levels in almost every city cycle. For type approval tests of retrofit systems, changing to low load cycles as soon as possible and mandating a test for lower temperature threshold for proper operation should be considered.