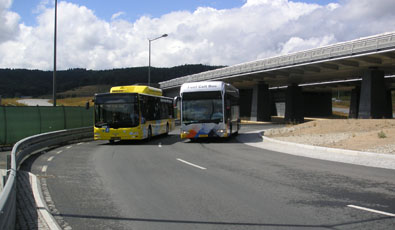 The HyFLEET:CUTE project commenced in January 2006 & concluded in December 2009. It has brought together 31 partners from industry, Government, academic and consulting organisations. Some of the worlds' leading automotive and technology development companies, major energy companies, policy developers and transport operators are collaborating to lead Europe into the development of a hydrogen-based transport system. This future system has the potential to be emission free. The project has seen the operation of 47 Hydrogen powered buses (both 33 Fuel Cell and 14 Internal Combustion Engine) in regular public transport service in 10 cities on three continents.

HyFLEET:CUTE was established under and is financially supported by the European Commission's 6th Framework Research Program. The European Union's Energy Policy aims to diversify and secure energy sources for Europe, while reducing Carbon Dioxide and other emissions harmful to the environment and human health. Hydrogen might be a key element in this future strategy for road transport.

The HyFLEET:CUTE Project was divided into 7 Work Packages (WP).

Through the project so far:

Potential Impact:
HyFLEET:CUTE has clearly demonstrated that hydrogen bus technology is to near commercial readiness.

If the bus technology would be adopted throughout Europe, this could see the replacement of all city bus fleets with zero CO2 emission buses. The technology would also enable Europe to have greatly enhanced transport fuel self-sufficiency, and move it strongly towards a renewable based fuel cycle.


For more details of the achievements in the HyFLEET:CUTE project ore full list of partners compare attached pdf files.

In 2010 the successor of this project CHIC (Clean Hydrogen in European Cities - www.chic-project.eu) commenced.

The Future
While not a formal part of this project, many of the project partners have already commenced discussions and plans for subsequent partnerships and projects which will further progress the vehicles and refuelling infrastructure technology.

More detailed information on the project is provided in the attached pdf file and at http://www.global-hydrogen-bus-platform.com. The download section of the web-page offers extensive material around hydrogen production, infrastructure, used buses and predecessor projects.