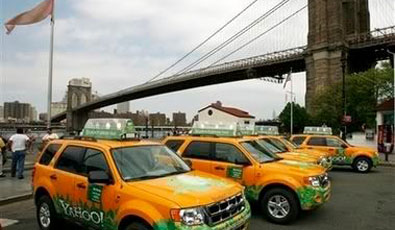 Hybrid electric vehicles were introduced in taxi fleets based on a private initiative in 2005. Now nearly 50% of the fleet has been exchanged being hybrid electric or CNG based.

San Francisco aims leading the way in reducing taxi greenhouse gas emissions. The taxi drivers wanted to join that initiative.Since 1994 San Franciscos taxi policy is developed in a newly formed 7-person Taxi Commission. A member recommended at its very first meeting that clean taxis be placed on the agenda.Until 2004 the cab company owners didn’t have a practical alternative to the gas-thirsty Crown Vic. But in 2004 Ford was planning to introduce a small hybrid SUV being possible to us as a cab. One year later the first 15 hybrid cabs (Ford Escape Hybrid) were introduced, 10 by the Yellow Cab Company and 5 by the Luxor Cabs. This was the first hybrid taxi fleet in the United States. The cars have now driven around 300,000 km.The mayor, the city government and the taxi companies co-operated in beating those early success.>Because there were no subsidies then the rental fee rose by USD 7.50, which the driver has to pay per shift to drive hybrid and other low-emission taxis. This is called the gate.

In spite of the higher rental fee the number of hybrid cabs increased. The reason for this is the reduction of USD 20-40 per shift on petrol/gasoline when driving such vehicles. This compensates the increased rental cost.The cause is the improvement in fuel efficiency from 9-10 miles per gallon to 30 mpg in city driving for the hybrid electric vehicle (25 l /100 km to 7.8 l/100 km).New local and federal incentives and the gate solution increased the share of alternatively fuelled vehicles to approximately 50%.The auto-mobile industry identifies the market for environment-friendly hybrid taxis. Car manufacturers Ford, Nissan and General Motors have all promised to make a larger number of hybrid cars specially designed for use as taxis.2/3 of our fleet are now hybrid-electric or CNG, and the GHG emissions have been reduced by 50,000 tons per year.