How Leipzig tripled the number of cyclists in 20 years (Germany) 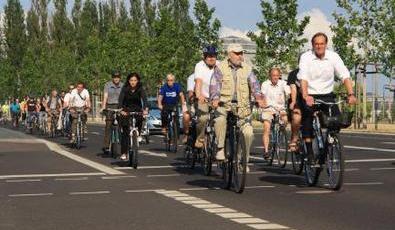 The city of Leipzig in Germany has tripled the number of cyclists in the past 20 years. The key to this success were large-scale infrastructure development, a change in people's attitudes towards cycling and a supportive organisational structure.

At the end of the 1980s the city of Leipzig had a relatively low share of cyclists (about 5 per cent of daily trips). Public opinion about day-to-day commuter cycling was relatively low and the existing infrastructure did not allow safe and convenient cycling. To change this situation, the local municipality implemented a range of measures to create a supportive organisational environment, as an improved infrastructure, along with awareness-raising and promotional activities.

To lay the basic foundation, both the quality and quantity of the existing cycling infrastructure was improved. The network length was quadrupled, reaching 376km. New supporting infrastructure was built: the local university built two underground garages for cyclists. Altogether more than 1 000 parking racks were installed in the city centre and a further 500 throughout the city. A private bicycle rental service called Nextbike was founded in Leipzig in 2004 and offers rental bicycles in several German and European cities today.

All the visible improvements would not have been possible without a solid organisational structure and political support within the municipality of Leipzig. There has been a dedicated position (Officer for Bicycle Affairs) within the municipality for the past 20 years, with responsibility for co-ordination, events organisation and promotion. Since July 1989 there has been a working group for cycling - which today meets every fortnight. It co-operates closely with the ADFC, the national pressure group for cycling, and invites them to their regular meetings. There is a Bicycle Master Plan, which outlines all the measures designed to realise its goals of increasing modal share for cycling by 4 per cent and reducing severe accidents by 25 per cent.

The city hosts annual roundtables where participants discuss the best ways for promoting cycling in the city. The City’s Mayor supports cycling very actively and takes part in promotional bike tours. An example of the latter was a tour as part of the International Transport Forum world conference in the Active Transportation Tour project. In addition, the Mayor also holds a regular citizen consultation hour on cycling.

As a result of effective promotional activities and improved bicycle infrastructure, the city has won the second prize in the national Stadtradeln project based on the number of kilometres citizens cycled in 2010.

As a result of ongoing political support and consistent efforts, the share of bicycle riders has now reached over 18 per cent in Leipzig. This percentage relates to springtime percentages, with the annual average around 14.4 per cent. Building on this solid foundation, the city is now ready to share its experiences internationally. In 2008 Leipzig hosted the OECD International Transport Forum conference. In 2008/09 the city had a BYPAD audit (Bicycle Policy Audit). Since March 2011 Leipzig has also been a partner in the Central MeetBike project, where it shares its experiences with cities from Poland, the Czech Republic and Slovakia.